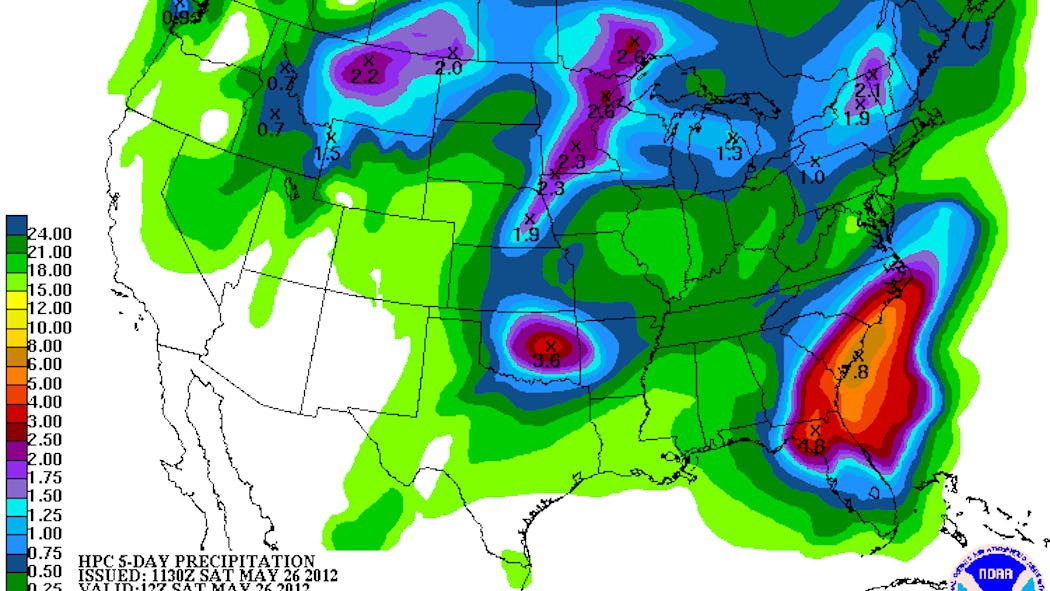 This Memorial Day Weekend promises to be a hot one with temperatures running about 10 degrees above the normal values of 62/82 for the low/high respectively. That means morning lows will be generally in the low-mid 70s for the next several mornings and daytime highs will be in the lower 90s for the next several afternoons. We can expect lots of sunshine today and again on Sunday with just some of those high, thin cirrus clouds around. More of a stratus deck is expected for at least part of Monday which may knock a degree or two off the daytime highs. Generally fair skies are expected for the overnight hours.

Gusty southerly winds will also be the general rule for today and Sunday with those winds gusting to near 30 mph at times. The winds will subside after sunset to around 10-15 mph. For Memorial Day a cool front will be moving into the state and should be reaching this side of the state that night. A somewhat weaker pressure gradient and the extra cloud cover should combine to keep those southerly winds to around 10-20 mph so a bit of a break in that regard.

More importantly, this boundary will be arriving during the overnight hours, will be stalling out in our general area for the next few days after that before getting pushed all the way down to the Gulf of Mexico by late in the week. This will provide us not only a break in the excessive, early season heat but a decent shot at some badly needed showers/storms.

Notice the map on the right which is what we refer to as a QPF or a Quantitative Precipitation Forecast. It is valid through this coming Thursday morning and it obviously has OK in a precipitation bulls eye with the potential for several inches of rain during that period.

Right now the pattern suggests the potential for several rounds of showers/storms beginning Monday night and extending at least through Thursday. However, the pattern is also ambiguous enough to create some uncertainty regarding which day or days will have the best chance. Thus, I have used a broad brush 30% on the rain chances for Tue, Wed, Thu and even kept in a slight chance for Friday. Subsequent model runs will eventually allow for some fine tuning regarding the timing and location of our rainfall chances. I just hope it does not turn into one of those situations in which we try to catch up on our rainfall deficit all at once.

At any rate, stay tuned and check back for updates.