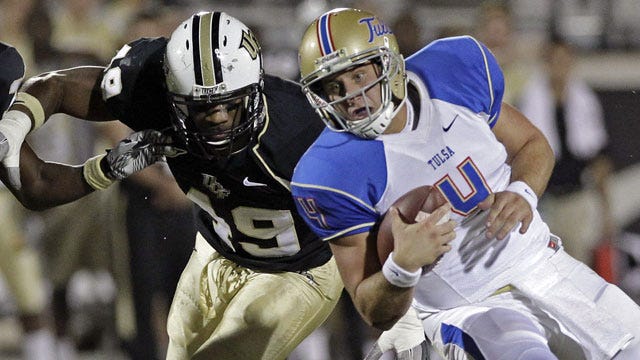 ORLANDO, Florida – In a battle of Tulsa's explosive offense and Central Florida's nationally-prominent defense, something had to give.

And while both teams yielded a bit, the UCF defense conceded more in a 24-17 Tulsa victory on Thursday night in Orlando.

Twenty-four points might seem like a great defensive outing for most teams, but that was 15 more points than the Knights had given up in the rest of their home games combined.

No team had even scored an offensive touchdown on Central Florida until TU receiver Willie Carter actually took a rush 19 yards into the end zone with three minutes remaining in the first quarter.

That only tied the game at 7, however, as UCF had gotten on the board first just four minutes in.

From there, the grinding began as TU took drives of nine plays and 11 plays down the field, only to be held to field goals both times for a 13-7 lead.

With the gritty pace of the game, is appeared Tulsa would carry a lead into halftime, but UCF turned around and went 66 yards in eight plays, scoring on a short run to take a 14-13 lead into the half.

The Golden Hurricane managed another field goal for the only score of the third quarter. Kicker Kevin Fitzpatrick was 3-of-3 on the day with makes from 25, 25 and 36.

Midway through the fourth, trailing 17-16, Tulsa finally began to impose its will on offense. G.J. Kinne and his receivers executed a beautiful 10-play scoring drive to take the lead for good in the game.

The Golden Hurricane was up 22-17 and went for two to make it an even touchdown. Kinne connected with receiver Bryan Burnham to give Tulsa the first successful two-point conversion against Central Florida since October of 2008 when the Miami Hurricane converted one.

One last effort from UCF resulted in a huge goal-line stand from the Hurricane D, stopping the Knights four straight times outside the end zone for a turnover on downs. The running game took over and milked the clock to seal the deal on Tulsa's sixth win of the season.

TU is now bowl eligible for the second straight year and has won five straight. Tulsa improved its record to 6-3 overall (5-0 C-USA) while UCF fell to 4-5 (2-3).

The Golden Hurricane's execution was a huge key in the game, with no penalties in the entire contest.

Tulsa's normal stats were someone diminished against the playing style of the Knights. G.J. Kinne had 203 yards and a touchdown, but also led the rushing attack with 92 yards.

Outside of Kinne's performance, no other TU player broke the 75-yard mark in rushing or receiving.

Now that they've escaped what could easily be called a Thursday night trap game, Tulsa will return home to host Marshall on Saturday, Nov. 12.