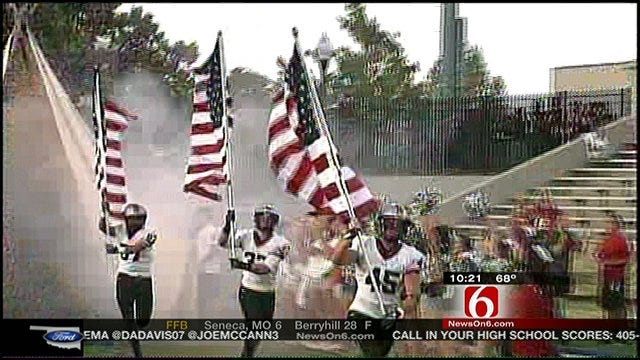 TULSA, Oklahoma -- After playing close for the first half, the Union Redskins pulled away from rival Jenks, dropping the Trojans 41-19 in the Backyard Bowl Friday.

After forcing Jenks to a three-and out to start the game, the Redskins looked efficient on their first drive, going 55 yards on nine plays, capped off by a nine-yard run by Kendall Holmes. The extra point was blocked, putting the Redskins ahead 6-0.

Jenks started a promising drive, but it stalled and were forced to punt yet again, which they downed at the Union three-yard line. After forcing an incompletion on 3rd down to seemingly force a punt, a personal foul call extended the drive.

Union capitalized on the opportunity, and Hunter Atyia completed a 59-yard pass to move the Redskins deep into Jenks territory. Holmes scored from three yards out, capping off a nine-play, 97-yard drive to put Union up 13-0.

On the first play of the next drive, Oklahoma commit Alex Ross took a handoff up the middle and went 85 yards untouched for a score, closing the gap to six points. Holmes fumbled the ensuing kick for Union and Jenks recovered at the 21-yard line. Trey'Vonne Barr'e did the rest, rushing 19 yard to take it to the two-yard line and then punching it in three plays later. The extra point was blocked, tying the game 13-13 in the second quarter.

However, that's where the Redskins took over.

Union blocked a Jenks punt attempt and recovered it on the 10-yard line. On a 4th and inches attempt, Atyia called his own number and scored to put the Redskins up 20-13. Jenks would put together another promising drive, but a goal line, rollout passes by Kyle Alexander was picked off by Kyle Crutchmer, who returned it 100 yards for a score, putting Union on top 27-13 at half.

Early in the third, Atyia continued to roll, connecting with Taylor Foote for a 44-yard touchdown pass to put the Redskins ahead 34-13. Union came away with another stop and Holmes capped off a long drive with a one-yard touchdown – his third of the evening – to essentially close the door on a Jenks comeback.

The Redskins move to 2-0 on the season, but the win may not bode well for Union. In its two previous state championship runs, the Trojans have won the regular-season matchups. The Redskins will now host the Broken Arrow Tigers at 7:30 p.m. Sept. 16.

Jenks falls to 1-1, but can get back in the swing of things next Friday, hosting the Owasso Rams at 7:30.