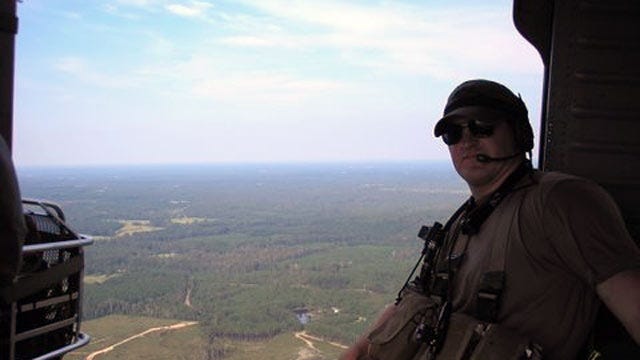 "He was just an All-American G.I. Joe. Just a great guy who loved his country," said Jon Woods.

Woods says he and Brown grew up in Siloam Springs together.

"Everybody liked John in high school," said Woods, "He was easy to get along with, great athlete, and great sense of humor."

Saturday afternoon Woods got an email from Brown's mother Elizabeth Newlun stating the Navy Seal unit Brown had been assigned to had been shot down in Afghanistan.

"Hearing the news that it was the Navy SEAL team, or a large group of the men that were killed this morning, it doesn't surprise me that John was more than likely part of that team," says Woods.

"He loved to fight," said Jon Woods, "He loved his country. He likes doing the right thing and he really believed in what he was doing."

Newlun says her son studied pre-med in Florida before deciding to become a Para-rescueman in the United States Air Force. She says he was assigned to a Navy SEALS unit and was recently promoted to tech sergeant.

Newlun says the public outpouring of support and knowing Brown was not only her hero, but an American hero has given her comfort during this difficult time.

"We all have a great comfort in that he died doing what he wanted to do and that he died with honor," says Newlun.

According to Woods, losing Brown isn't only a tragic loss for friends and family, but also for our country.

"He was physically fit, mentally sharp, great sense of humor, and he was the perfect, you know, when I think of the perfect soldier, that was John Brown," said Jon Woods.

He says Brown is an airman who will always be remembered.

"He died a hero's death and I'm very proud of him and proud to say I'm a friend of his, and I'm going to miss him tremendously," said Woods.

Newlun says her son is best described in a letter written by Brown's uncle.

"John Brown was a rambo without the attitude," reads Newlun, "He was a humble healer in service to his country, a Special Forces medic on a mission in Afghanistan. He was brave, but never arrogant, powerful but always gentle, a smart man who knew himself and chose his words carefully."

Sgt. John Brown will be buried in the National Cemetery in Arlington, Texas.