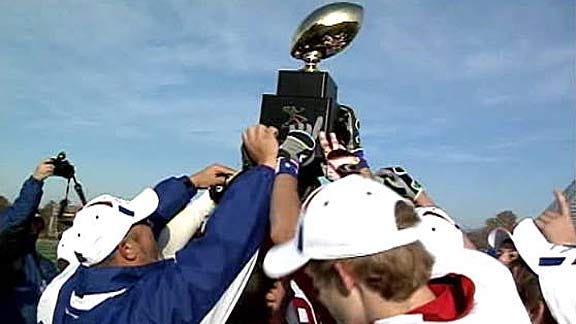 Not only is it the schools’ first football title, but the men of DCLA finish out the season undefeated and with the gold ball in hand.

In game action, Deer Creek-Lamont took an early 8-0 lead on a touchdown by junior running back Connor Kirby.

Then with three minutes left in the first half, DCLA’s Kirby took it to the end zone for his second touchdown of the game to put the Eagles up 14-0.

At the half the Eagles were up 14-0 over the Indians.

Then with five minutes left in the game DCLA scored again to close out the game 28-0.

The Indians graduate nine seniors and will look to a small group of juniors to step it up next year and lead the team to another great season.

Meanwhile Deer Creek-Lamont will graduate seven seniors and the juniors and freshman from this season will have great playing experience to build on next year.