Class 3A Top Games to Watch: Round 1 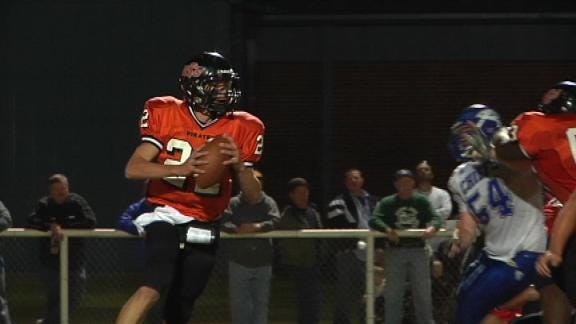 OKLAHOMA CITY – The Oklahoma Class 3A playoffs start Friday and feature some of the most explosive offenses and interesting matchups in the state.

Here are four key first round games to check out that should live up to the hype as the teams battle it out in the win-or-go-home, single elimination bracket.

Verdigris at Sperry– Sperry just missed out on a 3A-5 district title this season, falling in a close one to Cascia Hall to pick up its only loss of the season. Other than the week nine slip-up against the Commandos, Sperry easily handled almost every other team on its schedule. Only one other opponent was able to give the Pirates a scare: the Verdigris Cardinals.

Sperry knocked off Verdigris in a week one thriller, winning 31-28. But the Cardinals will now have a shot at revenge as the two meet in what promises to be an electric first round affair. Outside of Sperry, Verdigris dropped only a contest against Metro Christian in week eight.

One of these two teams will advance while the other will finish the season against the same opponent it opened with.
Nowata at Sequoyah-Tahlequah – This game is an oddity, as the two teams met to finish the regular season and will now play each other two weeks in a row.

The Sequoyah-Tahlequah Indians won the previous matchup against Nowata, 21-6. But Nowata has several impressive wins under its belt and will be looking to come out and turn the tide from just one week before. Sequoyah-Tahlequah is among the top teams in 3A and finished on top of the District 6 standings, but will have to repeat history in order to escape the first round and make a run at a state title.

Tuttle at Madill – This matchup features two teams whose records might not reflect how dangerous they are come playoff time. Madill lost two games, but one was by three points against Plainview and the other by six at Pauls Valley. The Wildcats easily handled every other team on their schedule.

Likewise, Tuttle’s three losses might not look great in the district standings, but they were all close losses to quality teams. The Tigers lost by an average of just more than three points per contest to Cache, Bridge Creek and Anadarko. The result is a first round matchup of teams who will be hungry to prove themselves and move forward in the brackets.

Purcell at Bridge Creek – The PurcellDragons ended the regular season with a tough loss, but also played in a tough district. After going undefeated in non-district play, Purcell ended up behind Plainview and Madill and tied with two other teams in District 2. But theDragons showed plenty of signs of life during the season and should prove a tough out in the first round.

Bridge Creek, meanwhile, has momentum on its side. The Bobcats have not only won three straight, but dominated those three ballgames. They have also won seven of their past eight contests.