New Quarterbacks To Keep an Eye On 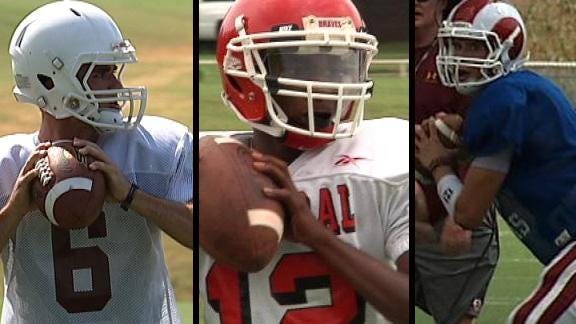 TULSA, Oklahoma – There are a couple of newcomers to the high school football scene this season that you may want to keep an eye on. The limelight isn’t any hotter than it is under center, and a few Sooner state quarterbacks could make a big difference in their respective district races in 2010.

Oklahoma Sports looks ahead to some of the top quarterbacks from around the state that you may not have heard of – until now.

THE NEW KIDS ON THE BLOCK:

Albert didn’t play much in 2009 after transferring from Bishop Kelley. He started at quarterback in two games for the Hornets, but was ruled ineligible by the OSSAA for transfer violations. The entire BTW program came under fire, and saw what could have been a great opportunity to repeat as champions go up in smoke after the team was forced to forfeit multiple games late in the season.

But all of that is behind Albert and the Hornets. The 2010 season starts with a clean slate. Albert could be the guy to carry the Hornets back to respectability and 5A dominance.

He’s got the skill and the makeup to make big plays in key situations, we just haven’t seen it. He’s pretty tall, but not very big. He’s got a spindly frame but amazing power for a guy his size. He can hit the quick slant, the deep ball and float a ball over the linebackers if need be. His range is off the charts and he will have plenty of skill players to get the ball to this season.

There are a lot of unknowns with Albert. He essentially sat out a whole year after the OSSAA rulings and hasn’t been really hit in a live game situation in a while. Will he be rusty? Our guess is that he will get his feet under him and make a big impact on Booker T. this season. He can make plays with his feet as well, but expect big things from his arm in 2010.

Final Thought: Players who have had the privilege of playing taken away, tend to play with a greater chip in their shoulder. If it’s Albert’s throwing shoulder, watch out in 5A.

One Tulsa-area head coach described Steve Kragthorpe’s son as a potential Division-I talent if it wasn’t for his size. If Kragthorpe was 6-foot-3, he’d be a ‘can’t miss’ guy. Since he’s a bit on the smaller side, big name schools haven’t pounced on him the way you might expect them to.

When it comes to the game, he plays big. Kragthorpe spent his 2009 season firing rockets downfield in Kentucky. The Blue Grass State produced a blue collar worker. Without a doubt, Kragthorpe has the best teacher of any of the quarterbacks on this list under the same roof. His daddy has spent years on college sidelines as a coordinator, including time at the University of Tulsa.

Kragthorpe will benefit from not needing to do too much at Holland Hall this season. He has an above-average weapon behind him in Kwame Sexton. The eye-catching running back committed to Tulsa in early August. Kragthorpe will have opportunities to throw downfield, but won’t necessarily be the top option for the Dutch’s offense.

He has a track record, too. Kragthorpe led Trinity to a 9-5 record a year ago, including a 7-1 home mark. His team made it to the state title game before falling to St. Xavier 34-10. Kragthorpe played well all year, leading his team to 27 or more points six times.

Final Thought: He’s got a good pedigree and a strong arm. Expect a more impressive win-loss record from Kragthorpe than stat line in 2010.

Harper has one of the toughest jobs in 5A this fall: filling the shoes of arguably the state’s best player in 2009. Demarco Cobbs left a massive hole in the Central Braves’ roster when he departed for Austin and the University of Texas last summer. Now, Harper has to pick up the pieces of Central’s Humpty Dumpty mess.

But there is good news. Harper is a Cobbs look-alike. They act the same way. They run the same way. They throw the same way. They even have a similar haircut. Harper won’t throw darts in his first year under center, but will make enough plays with his arm to keep opposing defenses honest, opening up opportunities to blaze a trail to the endzone with his incredible running ability.

Now, he’s good, but he’s not that good – yet. His new head coach, Dan Phillips, thinks he has the maneuverability to make a big impact under center.

Final Thought: Don’t expect Cobbs-like numbers right away, but we could see Harper start to show up on coach’s radars by November.


BACK FOR ROUND TWO:

He’s seasoned thanks to one hard hit to the 2009 starter’s collar bone. Johnny Deaton, now at Oklahoma State, went down in a heap in the season opener a year ago and in stepped the Sandites’ knight in shining armor. Harger carried the squad in his first year under center.

Harger finished the year with 874 yards passing and nine touchdowns. He completed over 50 percent of his passes and benefitted from having one of 6A’s top rushers behind him to hand the ball off to when the team got in a jam.

This year, he’s the man. He’s got good height at 6-foot-3. He’s not terribly stocky but can see over defensive lines. He’s got a good arm with some pop on his passes, and will only get better as the year goes on. Head coach Dustin Kinard raved about him during a preseason workout this fall and expects big things from Harger.

Using a college analogy, Harger is Landry Jones. The freshman had to step in at Oklahoma a season ago when the face of the team when down in a heap. Deaton was Sand Springs’ Sam Bradford. Fast forward a year, with a year of 6A football under his belt, Harger may be ready to take the next step towards being a productive passer in a class full of titans.

Final Thought: Expect 1,500 yards through the air or more this season from Harger. Expect more wins from Sand Springs, too.

He isn’t the main option for the Rams under center, but many fans think he ought to be. Key filled in more than admirably for injured starter Joe Lindsey last year as a sophomore and got much needed varsity experience.

Lindsey will play all over the field as a senior, giving Key a shot at more playing time. Key has a big arm and his coaches like his accuracy. He’s been through the fire already, starting his first three games against some of the big boys of 6A – Muskogee, Broken Arrow and Jenks.

At this point in his career, he’s not quite in the top tier of 6A quarterbacks. Playing as well as Bartlesville’s Kirby Schoenthaler, Jenks’ Sawyer Kollmorgen and certainly Southmoore’s Kendal Thompson could happen for Key, but it will take some work.

Final Thought: Don’t expect big numbers from Key this season. He’ll be splitting time with another talented passer. Do expect him to make some big plays for the Rams in 2010. He may possibly be the most underrated player in 6A.

Give us your opinion in our High School Football Forums

New Quarterbacks To Keep an Eye On