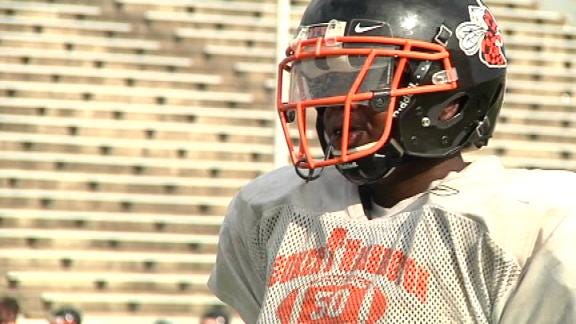 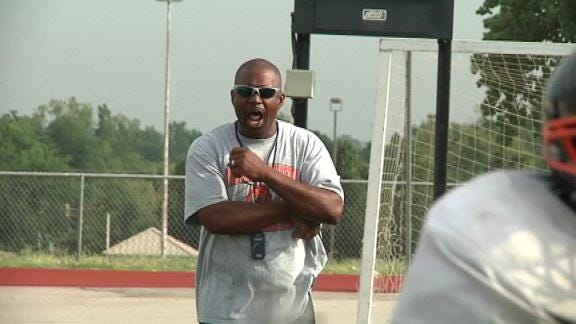 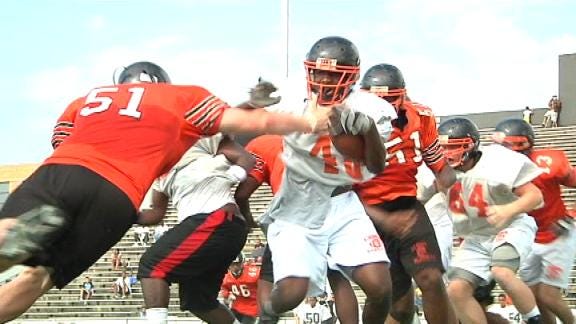 TULSA, Oklahoma – Nobody is happier to see 2009 in the rearview mirror than the Booker T. Washington Hornets. In the past 12 months, the Hornets have lost their head coach, forfeited games, and missed out on the opportunity to defend its 2008 5A state crown due to OSSAA sanctions.

Booker T. lost a lot of talent, but returns just as much. The Hornets toughest task will be finding a replacement for quarterback Eric Bennett. Jordy Albert and Dominique Sells both want the job and have battled during practices, splitting the reps with the first team.

Up front, the offensive line is powerful, led by O’Carroll. He’ll help block for one of 5A’s most talented runners, Isaac Bennett.

The receivers are perhaps the best in the state with Tyler Lockett and Dante Barnett flanking the field. Both have impressive speed and good, solid hands. The duo could score 30 touchdowns between them in 2010.

“It was real painful,” Lockett said about missing the postseason a year ago. “We all thought we had a chance to win the 5A state championship. Now we feel like we have a chip on our shoulder and have to get back what was ours from last year.”

Defense was the question mark in 2009. When they played to their potential, few teams could score on them. BTW held Carl Albert, the 5A champs, to just six points in the season opener. However, when it was bad, it was really bad. The Hornets gave up 38 and 28 points in back-to-back weeks against Broken Arrow and Bishop Kelley respectively.

“We’ve got a lot of hard hitters. We’ve got a lot of seniors out on the field so we all know what it takes to win a state championship,” said senior linebacker Derrick Alexander. “We all like to hit and we’ve all got a passion for the game.”

Darrell Hall joins the fold as the new head coach of the Hornets a year after hoisting the 4A gold ball with Star Spencer. He has good reasons for optimism on the East side of the state.

“I believe we have the talent and the work ethic to get to our ultimate goal, which is to win a gold ball,” said Hall. “But, we’ve got to get better every day.”

Players have high expectations and plan to march to a gold ball this fall.

“That’s what we play for,” said Lockett. “We don’t play for nothing else but to play for a gold ball.”

The Hornets have all the pieces to make a run at another gold ball. With 2009’s off-field speed bumps behind them, Booker T. is full speed ahead in 2010.

“It’s going to be really exciting,” smiled Alexander. “We really want to shut teams out this year. We want to be dominant.”

He paused, then summed up the Hornets’ expectations.

“If we do what we’re supposed to do, it’s going to be a special season.”

PLAYOFFS: Did not make the 2009 postseason.

BEST PLAYER: Tyler Lockett. The Kansas State commit hasn’t participated in any offseason workouts after having surgery to fix a broken bone in his right wrist last year. Once he makes it on the field, he’ll play receiver and safety, and possibly return kicks. The senior is one of Oklahoma Sports’s Top 30 players.

BIGGEST GAME: Week 7, October 15th vs. Bishop Kelley. The players will tell you it’s East Central because of the natural rivalry between the two schools. The fact is, the showdown with Bishop Kelley is a much bigger game because it has district implications. Last season Kelley beat BTW to stay perfect at home. The Hornets get a shot at payback on their turf in 2010.

O’CARROLL ON THE SCHEDULE: “There are a lot of good teams in 5A. You can’t take anybody lightly. Last year we took Bishop Kelly lightly and it cost us a spot in the playoffs.”