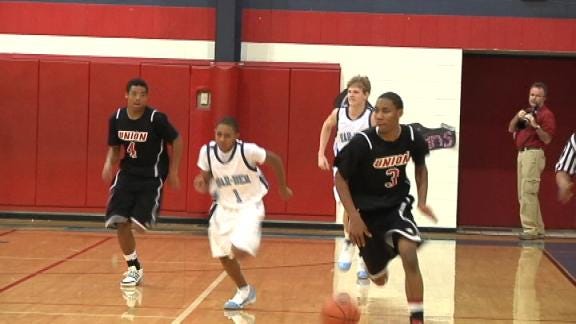 OKLAHOMA CITY -- They know full well what they face as they head into the Putnam City Invitational. The John Marshall Bears are only team participating in the tournament not from a Class 6A school.

A Class 4A designation often means John Marshall is seeded low in the tournament, but that’s hardly a fact that head coach Chad Campbell and his players shy away from. “I don’t take any of that personally,” he said. “But in my mind, I always like going in knowing that people have doubts about me or about what I’m capable of doing.”

It’s with that small-dog-in-the-fight mentality John Marshall will bring into the tournament, which features the likes of No. 3 Putnam City West, No. 5 Tulsa Union and No. 4 Putnam City, the defending 6A champion.

The bigger challenge may not be trying to tame the likes of star player Tyler Neal (P.C. West) or speedster Dillon Schooley (P.C. North). Instead, it will be more important for John Marshall to remain composed during rough patches and not fly off the handle. “That does us no good,” said Campbell. “They’re not just going to roll over because we say ‘Hey, we can play too.’”

The Bears will rely on senior leadership to contest the opposition’s forces. Among them, combo-guard Tavion Fleeks, who has seen an increased role in ball-handling and has become a team leader. Michael Post is also a standout football player and top-notch defender. Brandon Bray, the team’s tallest player at 6’4”, has improved from the beginning of the season, also transitioning from football.

Instead of trying to shoot the lights out or run another team into the ground, it will be a fundamental focus for Campbell’s crew, emphasizing the importance of boxing out and grabbing rebound. “We can’t let the bigger teams have two or three or four chances to score on us,” he said. “We’ve got to limit them to one. If they made it, they made it. But if they missed it, it needs to be our rebound.”

Putnam City North serves as the host school for this year’s invitational. Every year, the tournament rotates between the three Putnam City schools. Second-year P.C. North coach Rick Harris gets his first chance to organize the tournament – no easy process.

Harris says he started organizing the tournament in August. Among the tasks included securing sponsorships, parking and entrance instructions, organizing which team gets which locker rooms and making sure those locker rooms get locked down to thwart thefts, since school will be in progress when the first game starts.

“You want to make sure you get your sponsors lined up and get the teams pointed in the right direction so that when they show up, it’s as easy as possible for them to come in and play basketball,” he said.

That doesn’t even cover crowd detail. In addition to the occasional mean-spirited fan, Harris was tasked with readying the Eagles’ gym for the enormity of the schools’ fan bases.

One of the state’s top teams will have a rough go of it in the tournament. Union’s forces are depleted, with several starters missing time due to injury.

Among the wounded are seniors Brice Brown and Tim Abraham, both of whom may be out for the season. “It’s an opportunity for some of our young kids and even some of our older ones in the program to step up,” said Union coach Rudy Garcia. “That’s our challenge right now: Who’s going to step in and fill that void?

“We lost some quality kids. We feel like we have some quality ones there who are just young and inexperienced. They need court time and they’re going to get it this weekend against good competition, which will help us down the road.”

Sophomore J.C. Hartzler has stepped into one of the starting roles and is expected to put up some points. Post/wing player Drew Hudson will also be counted on for offense and Cedric Johnson will have an increased defensive role.

“We’re looking forward to, hopefully, being able to go out and perform at a top level,” said Garcia. “I just think it’s going to be a good trip for us to develop.”