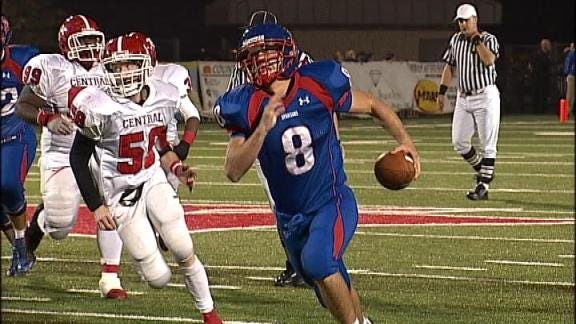 The Central Braves entered Friday’s playoff showdown with Bixby looking to fight the perception that they were a one-man show with Texas commit Demarco Cobbs. Unfortunately for the Braves, that theory was tested Friday night as Bixby eliminated the Braves 17-13.

Bixby got things going by mixing in a wildcat formation with Tulsa commit Dewitt Jennings. Jennings was able to use the formation to his advantage and get in the endzone for an 18-yard touchdown to give Bixby an early 7-0 lead.

The Braves would respond later in the first quarter. Tyron Garth delivered a big play with a 76-yard touchdown run. After an unsportsmanlike conduct penalty forced the Braves to try and miss a long extra point, the Bixby’s lead had been cut to 7-6.

In the second quarter, it was 10-6 when Cobbs pulled up lame on a quarterback scramble deep in Bixby territory. He left the game and did not return with what was later diagnosed as a strained calf.

“Demarco has so much heart. He wants to do so much for our team. I’m disappointed for him because I know he wanted to do a whole lot for these guys,” Central head coach Corey Russell said.

After Cobbs left the game, Central was able to capitalize shortly after that quarterback scramble when Garth punched in a short touchdown run to give Central a 13-10 halftime lead.

Bixby would control the second half, however. Quarterback Kevin Lamb had the game’s critical play with a 50-yard touchdown run to give the Spartans a 17-13 lead.

Bixby’s defense would hold up for the rest of the game. The final big play came late in the fourth quarter when Jennings made an interception to halt Central’s last drive.

“I didn’t want them to score at all,” Jennings said. “We worked so hard this season. I had to get up there and get it.”