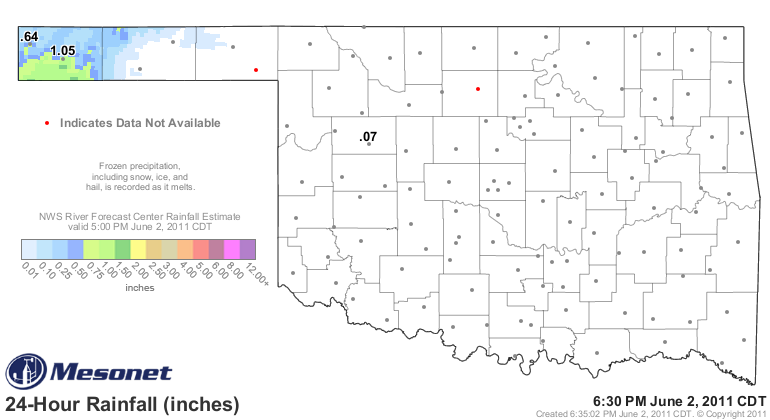 Notice the map on the right from the good folks at the Ok Mesonet. It shows the 24 hour rainfall accumulation across the state. Not particularly noteworthy perhaps until you look closely at the panhandle where Boise City received more than an inch of rain. What makes this significant is that the last day in which they had received even as much as ¼" of rain was on Sep 24, 2010, a record streak of 250 days with less than ¼" of rainfall which was finally broken yesterday. Now that is a drought!

As for this side of the state, our rainfall chances will be in the slim to none category going through the weekend and into early next week. Not only that, but temperatures will keep climbing and will be generally running around 10 degrees or more above normal both during the day as well as at night. This early season heat wave has also produced our first ozone alert of the year for Friday.

We should have a fairly brisk southerly wind of 10-20 mph on Friday but after that the pressure gradient looks to relax somewhat and lighter southerly winds should prevail for the weekend and into next week. The important point though is that the winds remain from a southerly direction so there will be no major changes in the character of the air that is over us.

Aloft, a ridge of high pressure will be dominating with drier air above the surface. This drier air has mixed down enough to keep our dew point temperatures in the 60s instead of the lower 70s which we had at the first of the week. This has implications regarding the combination of heat and humidity with the result being that the heat index is expected to only add a few degrees to the actual air temperature. With air temperatures expected to reach the mid 90s through the weekend, heat index values may still approach 100. But, as long as the dew point does not get above 70, it is not quite as oppressive.

Much above normal temperatures are expected to persist through the coming week as well along with only isolated showers or storms at best. The ridging aloft should weaken somewhat as the week wears on allowing for perhaps a few of those popcorn showers or storms during the heat of the day. We also expect a few more clouds during the day which should knock a few degrees off the daytime temperatures. Other than that, this early season heat wave is getting the month of June off to a hot, dry start.