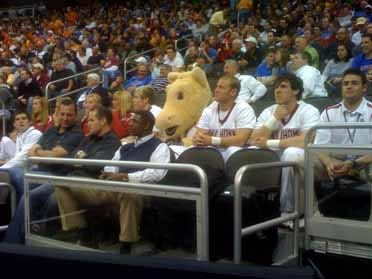 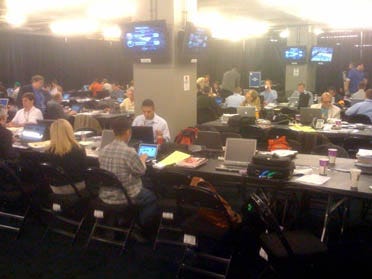 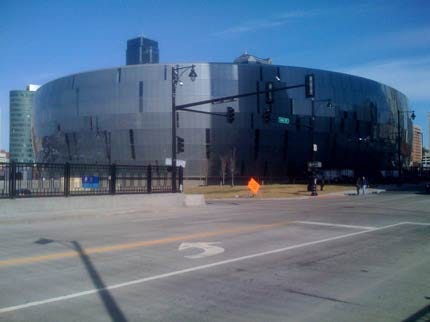 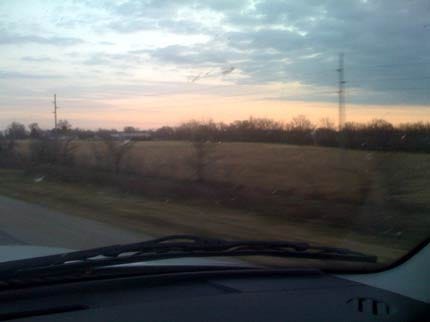 News On 6 sports reporter J.B. Long is at the NCAA Tournament in Kansas City providing updates, insight and thoughts on the tournament.

Morgan State's Ameer Ali has just been ejected for a WWE-style takedown of Blake Griffin.

There's some back story here. Ali poked Griffin in the face early in the half. Blake, expecting a foul call, left the ball unprotected. Ali managed to knock it off his leg and out of bounds for a turnover. The two have been going at it ever since.

I've lost track of the cheap-shot-on-Griffin count for the season... Anyone?

OU is wrapping up a great first day of the tournament for the Big 12. The Sooners will move the conference tournament record to 3-0. In addition to their win over Morgan State, Texas beats Minnesota by 14 and A&M tops BYU by 13.

Tomorrow OSU, Kansas and Mizzouri are all in action. The Pokes are two-point underdogs against Tennessee. The Jayhawks and Tigers are both double-digit favorites over ND State and Cornell, respectively.

Not sure whether Morgan State is incapable of doubling Blake Griffin, or just afraid to.  Maybe a bit of both, and the results have been disastrous for the Bears.

Halftime line on Griffin: 8-of-9 from the floor (remember our pregame discussion about how few shots he takes/misses), 18 points, 6 rebounds, 2-for-2 from the free throw line.

Didn't even break a sweat doing it, either.

From fadeaways off one leg to midrange jumpers, post moves and alley-oops, Griffin has put on a show in the first half.

Look for another quick burst from the Sooners coming out of the halftime locker room to put the game out of reach, then reduced minutes for starters the rest of the way.

In the first 20 minutes, OU shot 60% from the floor and made all 9 free throw attempts. Capel has at least one stat to pick at, however. Eight first half turnovers.

If you've ever wondered what a pep band version of Lil' Wayne's song "Lollipop" would sound like... Morgan State's band just played it during the media timeout. Pretty solid rendition.

OU is clearly looking to get Blake Griffin touches every time down the floor. Their inability to do so has been criticized extensively in the week since Bedlam III.

Seems like a pretty simple formula for success against a team that is too undersized to deny Griffin the basketball.

Morgan State's #3 is listed as Jermaine "Itchy" Bolden.  However, he was announced in the starting lineup as simply, "Itchy."  Will have to remember to ask for the story behind that one... or maybe I shouldn't.

Press row, the national media in particular, got a laugh out of Boomer taking a seat in the stands to watch what turned out to be a thrilling finish to the Michigan-Clemson game.

If the Sooners advance, they'll get the Wolverines in round two.

OU in home white unis, ready to tip off.

As we count down to tip off (only one half of Michigan-Clemson left before the Sooners take the floor), here's one way to demonstrate Blake Griffin's dominance that I just noticed for the first time...

Blake ranks third in the nation in FG%, but that doesn't tell the whole story.

The OU Super Soph has participated in 31 games for the Sooners this year. He's MISSED five-or-fewer shots in 21 of them!

Reflect on that for a few seconds. We don't often pay much attention to missed shots, but it's a really telling statistic. Keep in mind that Griffin scores 22 points per game. And while I agree the Sooners need to get him more touches, Griffin gets his points so efficiently that he doesn't require many attempts, or even touches for that matter.

Please email me your thoughts leading up to and during the game at jb.long@newson6.net.  And be sure to catch our live report from Kansas City tonight on The News on 6, following hoops.

A very informal poll of 10 reporters in the media room:

How many games will the Sooners win in the NCAA Tournament?
One (1 vote)
Two (3 votes)
Three (5 votes)
I-have-to-wait-and-see-who-they-play-next (1 vote)

...Wish I hadn't promised anonymity to that lone abstainer so I could call him out publicly. Just kidding.

By the way, it's freezing inside the Sprint Center. 63 degrees outside, but has to be much colder in here. Good for the players. But the other 15,000 of us who aren't running up and down are bundled up.

A 2-seed got a major scare -- but it was Memphis, not Oklahoma.

In a post-game interview, Hill just told me that his decision to leave Tulsa was based on personal factors and a desire to be closer to home (Los Angeles).  He also gave a sincere and enthusiastic shout-out to many of his former TU teammates, including Ben Uzoh.

TU and the rest of CUSA just dodged a bullet.  The conference's reputation would have taken a huge hit if Memphis had become just the 5th No. 2 seed to fall in the opening round.

If you had Memphis going to the Final Four in your bracket, you can breathe a sigh of relief!  Just goes to show how slim the margin for error is on this stage, at this time of the year.  I'm sure the Sooners took notice.

Quick note: TU fans probably recognize Cal State Northridge's #3 Mark Hill, who might be on the verge of upsetting Memphis. He is a TU transfer. Kudos to my partner Scott Smith for pointing that out. The Matadors recruited Hill out of high school, but he initially opted for Tulsa.

Some good news for the Sooners in this Memphis game -- the officials are calling a tight game. 22 first-half fouls!

I sat next to an officiating coordinator for most of the first half.  He said that's not at all unusual in the NCAA Tournament, especially early on.  The Sooners will get a different crew for their game tonight, of course.  But expect a lot of whistles.  I generally think that rewards the more aggressive team, which Oklahoma should be against Morgan St.  It also leads into my 4 Keys to a Final Four run:

1) Willie Warren needs to play like the best point guard in the bracket.  A tall task given the fact that Ty Lawson plays for the No. 1 seed in the South Regional.  But UNC's point guard will be less than 100%, if he plays at all with a foot injury. Scoring, distributing and defending, a lot rides on the freshman.

2) Defend against penetration. We all saw what happened when Oklahoma let Byron Eaton turn the corner in Bedlam III.

3) Blake Griffin's FT%. If the refs are going to call 22 fouls per half, he'll be at the line a lot.  At just 59% for the season, it's perhaps the only weakness in his game.  A few extra freebies could be the difference between advancing or going home.

4) Don't dance with Cinderella.  No matter how well-prepared or talented your team, if you run into a Valpo or a Davidson, you're done.  None of the 5-16 seeds in OU's bracket jump off the page as a Cinderella... but then again, they never do.

Don't forget, I'm happy to publish any comments or field any questions at jb.long@newson6.net

After checking in for credentials, internet access is priority one.  (Believe it or not, the NCAA charges $16.50 per day for wireless service -- a small price to pay for the caliber of college basketball we're about to witness.)

The folks at the IT desk asked what team I was covering and how many days I would require access.  I responded, "Oklahoma," and before I had a chance to answer the second part of the question, they cut it, "Oh, so you'll be here through Saturday for sure."

The local volunteers then raved about the show Blake Griffin and the Sooners put on during yesterday's walk-through. If you saw our coverage either last night or this morning on The News on 6, you may have seen Griffin's between-the-legs dunk. It's certainly a hot topic at the Sprint Center.

Before Memphis and Cal State Northridge tip off, here are my picks for the four games in Kansas City today:

To all you Hoops Pick 'Em bracketologists, good luck!

Amazing.  I just made that drive from Tulsa a few short months ago for the Big 12 football championship at Arrowhead -- and yet there wasn't a single stretch of US-169 that looked familiar.  Guess it's just not a very memorable stretch of pavement.

This morning marks the start of the two greatest days on the sports calendar, the first Thursday and Friday of the NCAA Tournament.  We're here at the Sprint Center in anticipation of OU's first round game against Morgan State later this evening. I t will be the fourth of four contests played in this "pod".

First up, Memphis and Cal State Northridge in just a few minutes. Followed by Cal vs Maryland. Then Clemson and Michigan.

I'll have updates throughout the day about what's happening both on the court and behind the scenes, especially in regards to the Sooners. Please feel free to email me (jb.long@newson6.net) with any questions or comments, and I will publish/respond to them right here on Newson6.com.

Kristin Wells On Thursday, the city of Collinsville held a ribbon cutting for its new Refuge Community Center.

Kristin Wells On Thursday, the city of Collinsville held a ribbon cutting for its new Refuge Community Center.