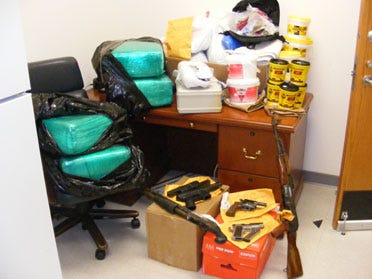 Guns, drugs and cash were seized as the Bureau of Alcohol, Tobacco and Firearms teamed up with the Muskogee Police Department on Friday.

The two agencies served two federal search warrants on two homes in the southern part of Muskogee.  Three suspects were arrested.  Authorities say two of the three are in the United States illegally.

Agents reportedly found five guns, $2,000, 150 pounds of marijuana, 40 pounds of MSF (a substance used to cut methamphetamine) and a half-ounce of cocaine.

Federal charges are expected to be filed against the suspects.