BAGHDAD (AP) _ The United States on Tuesday suspended all land travel by U.S. diplomats and other civilian officials in Iraq outside Baghdad's heavily fortified Green Zone, amid mounting public outrage over the alleged killing of civilians by the U.S. Embassy's security provider Blackwater USA.

The move came even as the Iraqi government appeared to back down from statements Monday that it had permanently revoked Blackwater's license and would order its 1,000 personnel to leave the country _ depriving American diplomats of security protection essential to operating in Baghdad.

``We are not intending to stop them and revoke their license indefinitely but we do need them to respect the law and the regulation here in Iraq,'' government spokesman Ali al-Dabbagh told CNN.

Details of the weekend shootings haven't been released, but the New York Times reported late Tuesday that a preliminary review by Iraq's Ministry of Interior found that Blackwater security guards fired at a car when it did not heed a policeman's call to stop, killing a couple and their infant.

The report, though unverified, seemed to contradict an account offered by Blackwater that the guards were responding to gunfire by militants. According to the story on the Times Web site, the report said that Blackwater helicopters had also fired. The Iraqi Ministry of Defense said that 20 Iraqis were killed, considerably higher than the 11 dead reported before.

``There was not shooting against the convoy,'' the Times quoted Iraqi government spokesman Ali al-Dabbagh as saying. ``There was no fire from anyone in the square.''

State Department Edgar Vasquez said he had not seen the Iraqi report, reiterating that the department was investigating.

``Let's let these folks do their job and get all the facts. If State Department procedures have not been followed, then at that point we'll assess what actions to take,'' Vasquez told The Associated Press.

The U.S. order confines most American officials to a 3.5-square-mile area in the center of the city, meaning they cannot visit U.S.-funded construction sites or Iraqi officials elsewhere in the country except by helicopter. The notice did not say when the suspension would expire.

The Iraqi Cabinet decided Tuesday to review the status of all foreign security companies. Still, it was unclear how the dispute would play out, given the government's need to appear resolute in defending national sovereignty while maintaining its relationship with Washington at a time when U.S. public support for the mission is faltering.

Polls show Gen. David Petraeus' report to Congress and President Bush's nationally televised address have had little impact on Americans' distaste for the Iraq war and their desire to withdraw U.S. troops.

Also Tuesday, three U.S. soldiers were killed following an explosion near their patrol northeast of Baghdad, the military said. Another soldier was killed in a vehicle accident in the northern province of Ninevah, the military said.

Exploiting public rage over the killings of what police said were civilians by Blackwater guards, anti-American cleric Muqtada al-Sadr demanded that the government ban all 48,000 foreign security contractors.

Al-Sadr's office in Najaf said the government should nullify contracts of all foreign security companies, branding them ``criminal and intelligence firms.''

``This aggression would not have happened had it not been for the presence of the occupiers who brought these companies, most of whose members are criminals and ex-convicts in American and Western prisons,'' the firebrand cleric said in a statement.

Al-Sadr insisted that the government of Prime Minister Nouri al-Maliki prosecute those involved and ensure that families of the victims receive compensation.

There was no threat by al-Sadr to unleash his Mahdi Army militia in retaliation for the killings.

However, his statement was significant because it signaled al-Sadr's intention to stir up anti-American sentiment in the wake of the weekend shootings and further undermine al-Maliki's U.S.-backed government.

Many Iraqis, who have long viewed security contractors as mercenaries, dismissed Blackwater's contention that its guards were attacked by armed insurgents and returned fire only to protect State Department personnel.

``We see the security firms ... doing whatever they want in the streets. They beat citizens and scorn them,'' Baghdad resident Halim Mashkoor told AP Television News. ``If such a thing happened in America or Britain, would the American president or American citizens accept it?''

Blackwater is among three private security firms employed by the State Department to protect employees in Iraq, and expelling it would create huge problems for U.S. government operations in this country.

In a notice sent to Americans in Iraq, the U.S. Embassy in Baghdad said it had taken the step to review the security of its personnel and possible increased threats to those leaving the Green Zone while accompanied by such security details.

``In light of a serious security incident involving a U.S. embassy protective detail in the Mansour District of Baghdad, the embassy has suspended official U.S. government civilian ground movements outside the International Zone (IZ) and throughout Iraq,'' the notice said.

``This suspension is in effect in order to assess mission security and procedures, as well as a possible increased threat to personnel traveling with security details outside the International Zone,'' said the notice, a copy of which was provided to The Associated Press by the State Department in Washington.

The two other firms, both of which are headquartered in the Washington, D.C., suburbs, are Dyncorp, based in Falls Church, Va., and Triple Canopy, based in Herndon, Va. Neither has the resources of Blackwater, which includes a fleet of helicopters that provide added security for State Department personnel traveling through Baghdad's dangerous streets.

In London, Crocker told reporters that ``an investigation of that incident is under way and it would be premature to comment until the investigation is finished.''

Interior Ministry spokesman Maj. Gen. Abdul-Karim Khalaf, who announced the Blackwater ban, said Tuesday the most important issue now is ``to find the best ways to put new regulations and conditions by the Interior Ministry on the work of security companies.''

A 2004 regulation issued by the U.S. occupation authority granted security contractors full immunity from prosecution under Iraqi law. Unlike American military personnel, the civilian contractors are also not subject to U.S. military law either.

Hassan al-Rubaie, a member of the parliament's Security and Defense Committee, said an investigative committee has been formed to consider lifting the contractors' immunity.

Some private security officials have blamed much of the confusion surrounding the work of the contractors on inefficiency and corruption within the Iraqi government _ especially the Ministry of the Interior.

Many security companies have tried to obtain weapons permits from the ministry, only to find the rules constantly changing. That forces security guards to choose between venturing into the streets without protection or running the risk that their weapons might be confiscated at a checkpoint.

U.S. officials arranged an extension of the deadline for weapons permits until the end of the year, although procedures for obtaining them remain unclear.

Blackwater and other foreign contractors accused of killing Iraqi citizens have gone without facing charges or prosecution in the past. But the latest incident drew a much stronger reaction by the Iraqi government.

Unlike many deaths blamed on foreign contractors, Sunday's shootings took place in a crowded area in downtown Baghdad with dozens of witnesses.

Yassin Majid, an adviser to al-Maliki, said the killings had deeply embarrassed the Iraqi government and forced it to act against Blackwater _ even before a full investigation had been completed.

``They were not subjected to the kind of attack or shooting ... that required a response of this intensity that led to the death of civilians,'' Majid said. ``This incident embarrassed the government and also embarrassed the American government.'' 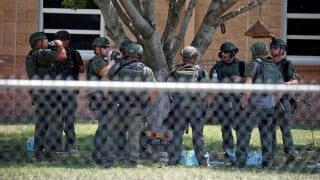 Governor Abbott: Texas Gunman Posted Online He Was Going To Shoot Up School

CBS News At least 19 children and two adults were killed when a gunman opened fire at an elementary school in Texas, authorities said Tuesday. Authorities said the shooter was killed on the scene by law enforcement officials. 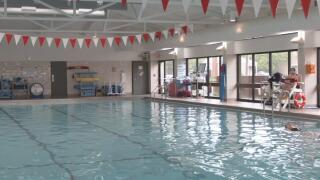 Mallory Thomas Many of us will be headed to the pools and lakes this holiday weekend. A Tulsa group is offering free swimming lessons to make sure all kids have the chance to be safe around the water. 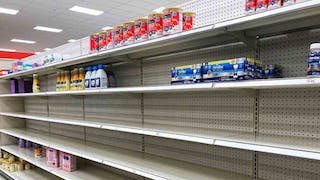 Associated Press The head of the Food and Drug Administration faced bipartisan fury from House lawmakers Wednesday over months of delays investigating problems at the nation’s largest baby formula plant that prompted an ongoing shortage. 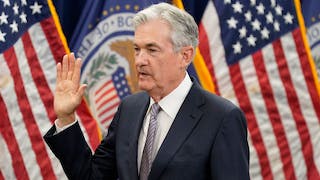 Associated Press Federal Reserve officials agreed when they met earlier this month that they may have to raise interest rates to levels that would weaken the economy as part of their drive to curb inflation, which is near a four-decade high.

Associated Press Former reality TV star Josh Duggar was sentenced Wednesday to about 12 1/2 years in prison after he was convicted of receiving and possessing child pornography. 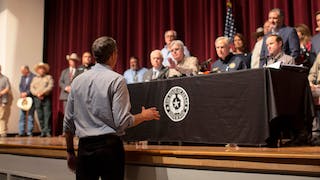 WATCH: Beto O'Rourke Confronts Texas Governor: 'You Are Doing Nothing'

News 9 On Wednesday, TX Governor Greg Abbott, flanked by his lieutenant governor, law enforcement, Texas senators, and other local legislators, held a news conference to update the public on what had occurred. the news conference was interrupted by former US congressman Beto O'Rourke. A yelling match ensued between Patrick and O'Rourke. O'Rourke was removed from the auditorium.
View More Stories