It was expected, but still a shocker: Byron Leftwich was cut by the Jacksonville Jaguars on Saturday.

The seventh overall pick in the 2003 draft and the Jags' starting quarterback for nearly every game since then when he was healthy, Leftwich was released after losing the starting job to David Garrard.

Coach Jack Del Rio had said Friday, when he made the decision, that Leftwich would either be traded or released but that announcement in itself made it difficult to make a deal for him.

Leftwich, often troubled by injuries and lacking mobility, missed 10 games last season because of an ankle injury. He was 19-of-38 passing for 226 yards and a touchdown in three preseason games.

But he played with the starters while Garrard completed 36 of 47 passes for 456 yards and a touchdown mostly against backups. Garrard has started 18 regular-season games in his career and had a passer rating of 80.5 in 10 starts last season with 10 touchdown passes and nine interceptions.

``It's bittersweet news,'' Garrard said Friday when he heard that Leftwich would go. ``I'm definitely shocked. I didn't see this happening. I'm beyond shocked. I really feel like this is a dream, but I know it's not and I know I'm ready.''

No. 2 quarterback Doug Johnson was released and replaced by Ryan Fitzpatrick, obtained in a trade from St. Louis.

Johnson was dumped a day after he threw a pair of interceptions in a 14-6 preseason loss to Indianapolis, another poor showing that prompted the Bengals make the trade.

The Bengals enter the season depending upon Pro Bowl quarterback Carson Palmer to stay healthy. Neither of his backups _ Fitzpatrick and fifth-round draft pick Jeff Rowe _ will have much experience in Cincinnati's system.

Fitzpatrick was a seventh-round pick in 2005 and started three games in 2005. He threw four touchdowns and eight interceptions overall that season.

The Bengals also made moves involving two of their players who have faced criminal charges.

They waived second-year receiver Reggie McNeal, who played quarterback at Texas A&M and was learning a new position in Cincinnati. They kept second-year defensive end Frostee Rucker, who has been slowed by a hamstring injury during the preseason.

Bloom spent his entire rookie year on injured reserve and hoped to make the team as a return specialist and extra wide receiver. Bloom averaged 20.3 yards on 12 kickoff returns in the preseason and 7.8 yards on 10 punt returns.

``We wanted more production out of Jeremy and we didn't get it,'' general manager Tom Heckert said.

Former star running back Priest Holmes was placed on the reserve/non-football injury list, guaranteeing that his absence from the game will stretch to almost two years.

After their first six games, the Chiefs will have a three-week window to activate their career rushing leader.

By then, though, Larry Johnson was already Kansas City's new rushing star, carrying for 1,750 yards _ in only nine starts _ in 2005 and then rushing for 1,789 yards on an NFL-record 416 carries last year.

The 32-year-old linebacker, who hadn't played in the NFL since 2000 because of several knee injuries, was one of 22 players cut as the Jets got down to the mandatory 53-man roster limit.

Veteran defensive linemen Kimo von Oelhoffen and Bobby Hamilton were also among the final cuts. Both are 36

Wadsworth was a long shot. He was a Florida State star and the No. 3 overall pick by the Arizona Cardinals in the 1998 draft, but knee problems ended his career after just 36 games in three seasons. After 13 knee operations and nearly seven years since last playing in the NFL, Wadsworth took a break from his thriving car dealerships to give football a shot again.

``I think Andre is just such a good role model in so many ways,'' coach Eric Mangini said.

Among the Vikings' cuts were two fifth-year veterans: receiver Billy McMullen and running back Artose Pinner.

McMullen, who had a career-high 307 yards and two touchdowns last season after he was acquired in a trade with the Philadelphia Eagles, became expendable when the Vikings signed Robert Ferguson last week.

Pinner filled in admirably for a game against the Detroit Lions last December when Chester Taylor was hurt, rushing for 125 yards and three touchdowns.

But Pinner and fellow running back Ciatrick Fason, a fourth-round draft pick in 2005 who was also cut Saturday, were bumped down the depth chart on draft day when Adrian Peterson was taken with the seventh overall selection.

Running back Kevin Jones was removed from the physically unable to perform list, setting a day-to-day timetable for his return to the field.

Jones missed the final three games of last season and all of training camp with a broken foot. He had run for 689 yards and three touchdowns while catching 61 passes for 520 yards and two touchdowns.

Quarterback Ken Dorsey was the best known casualty among the 22 players cut on Saturday. Derek Anderson beat him out for the third quarterback slot.

The Browns also cut three 2007 draft picks: defensive lineman Melila Purcell, Chase Pittman and receiver Syndric Steptoe. Purcell was chosen in the sixth round, while Pittman and Steptoe were taken in the seventh round.

Lawrence Tynes has beaten free agent Josh Huston for the New York Giants' kicking job for the moment and safety Will Demps was placed on injured reserve in a pair of somewhat surprising moves.

The Giants also traded running back Ryan Grant to Green Bay for an undisclosed draft choice in reducing their roster to 52 players, one less than league's regular-season limit.

The last spot probably will be used for Michael Strahan, the seven-time Pro Bowl defensive end who is expected to report on Monday after holding out for 36 days while deciding whether to retire. He is currently on the reserve-did not report list and does not count on the roster.

Quarterback Tim Hasselbeck, who lost the No. 3 job to Anthony Wright also was cut as the Giants released 21 players.

Thompson had been a starting safety for the Titans the past three seasons, starting 45 of 77 games in his five NFL seasons. He had 77 tackles and three interceptions last season but struggled at times. Not even two interceptions this preseason could help him salvage his job.

The Cowboys also cut 20 players, including rookie quarterbacks Matt Moore and Richard Bartel, to get to their roster to the regular-season limit of 53 players. All eight players drafted in April made the team, including rookie kicker Nick Folk.

Even though starting cornerback Terence Newman is uncertain for the Sept. 9 opener because of a slight tear in the tissue that runs across the base of his foot, the Cowboys didn't keep the 35-year-old Glenn.

Gramatica missed the preseason finale Thursday night because of a strained right hamstring he sustained after missing an extra point and a 51-yard field goal attempt in the preseason. Folk made all three of his field goals during the preseason, including a 52-yarder. 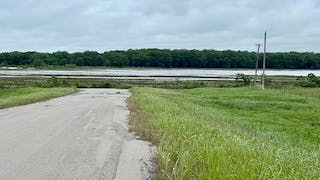 Ashlyn Brothers The Caney River has reached its threshold and the flood waters are still rising. The Tulsa Area Emergency Management Agency (TAEMA) expects the river to crest by early Thursday morning or afternoon. Officials said the water is projected to fall back below flood levels Friday afternoon. 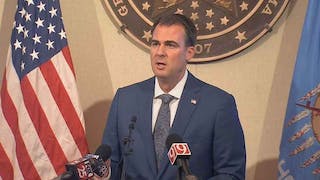 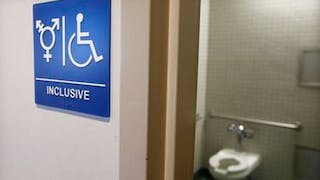 News 9 Governor Kevin Stitt has signed SB 615 into law. The bill requires students to use the restroom that aligns with their biological sex assigned at birth. 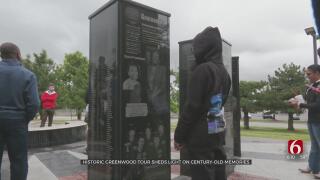 Kristen Weaver A tour of the Greenwood district brought people from Oklahoma, as well as from out of state to Downtown Tulsa. They're here to learn about the history and changes in the last 100 years. 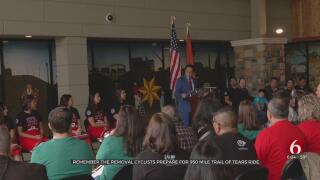 Jordan Tidwell A group of cyclists are getting ready to begin a nearly 1,000 mile bike ride through the Trail of Tears. This is the first Cherokee Nation group, made up of entirely women, to participate in the ride. 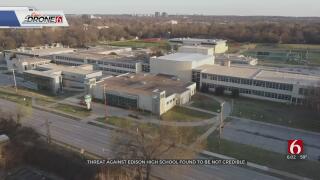 News On 6 Extra security was on campus at Edison High School after a potential threat was reported on Wednesday.
View More Stories