Coach Seth Greenberg was at a rare loss for words. Carlos Dixon felt vindicated. Jamon Gordon even got scared during all the excitement.

The victory lifted the Hokies (13-10, 6-6) into a tie for fourth in the league with No. 22 Maryland and Miami, and allowed the first-year league members to show that they aren't just a football school.

``Now we belong,'' said Dowdell, only a sophomore. ``I mean, they have to take us serious now. Whether they like it or not, we're here.''

Having lost badly in games against the ACC's top tier teams, including a 100-65 loss at Duke 18 days earlier, the Hokies set out to show something against the Blue Devils (18-4, 8-4) _ and made history.

The victory, not secured until Daniel Ewing's shot missed with the clock racing down to zeros, was the Hokies' first against a top-10 team since they beat No. 2 Memphis in 1986, also at Cassell Coliseum.

And this one ended with hundreds of students rushing onto the floor, and the public address announcer asking for whoever it was that wound up with Gordon's jersey to please return it because he doesn't have another.

``I was almost scared for a moment'' when the students charged onto the court, Gordon said. ``But I was so happy that we won.''

The victory was one of the biggest in Hokies history, and came against the most unlikely opponent _ the one with the reputation for working hard.

The other ranked teams in action Thursday night avoided losses, with No. 12 Louisville having the closest call before beating Marquette 64-61. No. 10 Arizona routed Oregon 92-67; No. 12 Gonzaga handled San Diego 90-73; and No. 25 Villanova defeated Seton Hall 66-52.

Behind 14 points and 18 rebounds from Coleman Collins, Virginia Tech outrebounded Duke 49-32. The Hokies got J.J. Redick in foul trouble for the first time this season and they blocked 12 shots, making All-America candidates Redick and Shelden Williams work extra hard for shots.

``It's almost beyond words,'' Greenberg, the Hokies' second-year coach, said, ``and anyone who knows me, to be beyond words is pretty hard for me.

``Duke is Duke,'' Greenberg said, struggling to explain his feelings. ``Ten Final Fours. Everything good you can think about college basketball, Duke epitomizes. To me, they're the Yankees, and I'm a Yankee fan.''

The finish was frantic, with Redick hitting a 3-pointer with 22.9 seconds left to give the Blue Devils a 65-64 lead, and Dowdell coming back with a jumper from the right wing that caused the sellout crowd to erupt.

After timeouts by each team, Duke inbounded the ball with 4.9 seconds left and Redick fed Ewing right of the key for his errant 3-point try.

The Blue Devils, reknowned for being relentless, came up short.

``It's all about hustle and effort and attitude,'' Redick said. ``You've got to go make it happen, and Virginia Tech made it happen tonight.''

Dixon led the Hokies with 18 points and more than held his own against Redick, who scored 19 and but missed nine of 16 shots. The 6-foot-3 Gordon added 17 points and four blocks, and Dowdell scored 11.

Redick brought the Blue Devils back to 60-all on a drive with 3:05 left. After Jeff King, a tight end who joined the basketball team after the football season ended, made a baby hook to get the Hokies back in front, Williams muscled one in inside to tie it again. That set up the thrilling finish.

Gordon then emerged from a crowd under the Hokies' basket to tip in a miss with just over 32 seconds left, bringing deafening roars, but Redick, a native of Roanoke about 40 minutes away, nailed his third 3-pointer.

``They beat us pretty bad down there, and I guess they didn't think we had enough gas in our tank to keep playing hard,'' Dixon said.

``We just showed them what we're all about.''

Travis Diener's 3-pointer to tie at the buzzer bounced off the rim.

At Tucson, Ariz., Salim Stoudamire shook off a slow start to score 22 points, and the Wildcats made 21 of 30 shots in the second half.

Channing Frye scored 19 points and blocked a career-high seven shots in the fifth consecutive victory for the Pac-10 leading Wildcats (22-4, 12-2).

Seton Hall played without swingman J.R. Morris, who was suspended to ``focus on his academic obligations,'' according to a written statement issued by the school. 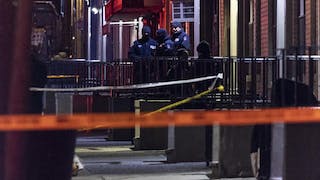 Associated Press The 22-year-old New York City police officer who was shot to death while responding to a call in a Harlem apartment came from an immigrant family and grew up in a community with strained police relations, but joined the force to make a difference in the “chaotic city,” he once wrote.
View More Stories