The planned Palestinian coalition government fell far short of what the United States and Israel wanted, and also disappointed Sunni Arab states that had hoped Hamas would soften anti-Israeli policies enough to satisfy the West and restart the flow of vital international aid.

Arab diplomats say Rice invited security and intelligence chiefs from Saudi Arabia, Egypt, Jordan and the United Arab Emirates to ask their advice on what, if anything, can be done to persuade Hamas to back down.

The session at the government security headquarters in Amman included some of the region's wiliest and best-connected heavies, fixers and go-betweens, including Saudi national security adviser Prince Bandar bin Sultan and Egyptian intelligence head Omar Sulieman.

Sulieman has deep ties across Palestinian politics, including with Hamas. Rice has been meeting with him regularly since Hamas won Palestinian parliamentary elections 13 months ago. They last met in Washington just weeks ago.

Rice and Abbas were both meeting Jordanian King Abdullah II, but their sessions were separate. Both were reporting on progress from their three-way summit with Israeli Prime Minister Ehud Olmert. For Abbas that meant explaining that he had failed to persuade Israel and Rice that the incoming Palestinian government would fulfill conditions for the restoration of foreign aid.

The Jordanian king is one of the U.S. allies with public misgivings about the possibility of civil war among the Palestinians, as well as in Iraq. Jordan has taken in hundreds of thousands of refugees from Middle East conflicts.

Abdullah and other Sunni Arab allies have strongly urged the Bush administration to energize peace efforts between Israel and the Palestinians, partly to improve the Palestinians' lot, partly to tamp down Islamic extremism that those government see as a threat and partly to counter the influence of Shiite Iran.

Abbas also was headed to Germany along with stops in Britain and France in a campaign to convince skeptical Western leaders that the deal he forged earlier this month with the ruling Islamic Hamas reflects his moderate stand.

At stake is about $1 billion in foreign aid for the Palestinian government cut off after Hamas defeated Abbas' secular Fatah party and took power last year. Abbas was elected separately and retains power, but the two-headed government structure was unwieldy and unable to deliver services or security.

Israel, the U.S. and the European Union label Hamas, which is committed to Israel's destruction and has killed hundreds of people in suicide attacks, a terror group.

Monday's three-way meeting was initially meant to offer weary Palestinians an opportunity to open discussions on the contours of an eventual independent state alongside Israel.

It also was a way to strengthen Abbas in his power struggle with Hamas, but he surprised both the Bush administration and some of his Arab backers by cutting a deal with Hamas that fell far short of international demands.

The U.S. and European Union insist that any Palestinian government must recognize Israel, renounce violence and accept past peace accords. Hamas has rejected those conditions. The unity accord pledges only to ``respect'' past agreements.

Egypt, Jordan and the UAE have all tried their hand at persuading Hamas to moderate its stance enough to end the international aid boycott and allow Palestinian peace talks with Israel. Saudi Arabia brokered the deal announced earlier this month without the blessing of the United States. U.S. officials have praised Saudi King Abdullah for attempting to help end months of Palestinian infighting but say they will reserve judgment on the deal until the government takes shape.

Arab diplomats say the Saudi king thought Hamas would move further than it did, and Abbas apparently thought the same.

Abbas, a moderate who is pledged to peace with Israel, has said the coalition deal is the best he can get from Hamas and goes a long way toward stabilizing the region. A power-sharing pact is seen as crucial to halting internal Palestinian fighting that has killed more than 130 since May.

Monday's summit in Jerusalem came after a six-year lull in such U.S.-brokered sit-downs, but ended with no new agreements. The Israeli and Palestinian leaders, however, did agree to meet again, and Rice said she expected to return to the region soon to revive a mothballed 2003 internationally backed peace plan.

``I hope that the Arab states also understand that they have a role to play in this,'' Rice told reporters Monday night in Jerusalem. ``This isn't just what the United States can talk about with the Israelis and the Palestinians. How about some of the ideas that were there in the Arab initiative? Why can't we get some of that going, too?''

Rice was referring to a dormant 2002 Arab peace proposal that would have offered wide Arab diplomatic recognition of Israel in exchange for Israel's retreat to its borders before the 1967 Mideast War, when Israel captured the West Bank and east Jerusalem.

``I don't want others to stand on the sideline and say, you know, the United States needs to deliver the completion of the roadmap. Everybody's got obligations. And one thing that I'll be talking to the Arabs about is what can you to do make this happen.'' 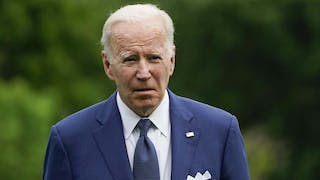 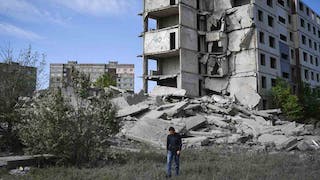 Associated Press Russian President Vladimir Putin issued an order Wednesday to fast track Russian citizenship for residents of parts of southern Ukraine largely held by his forces, while lawmakers in Moscow passed a bill to strengthen the stretched Russian army. 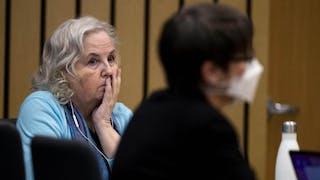 ‘How To Murder Your Husband’ Writer Found Guilty Of Murder

Associated Press A jury in Portland has convicted a self-published romance novelist — who once wrote an essay titled “How to Murder Your Husband” — of fatally shooting her husband four years ago. 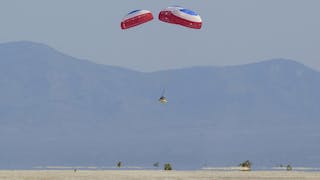 Boeing Capsule Lands Back On Earth After Space Shakedown 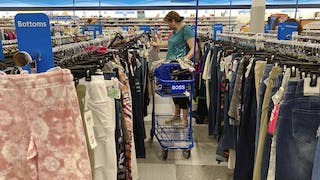 Retailers’ Troubles Sound The Alarm For Rest Of Economy 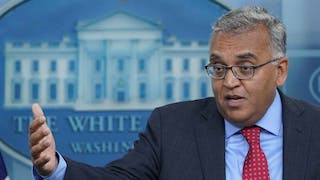 Associated Press The White House on Thursday announced more steps to make the antiviral treatment Paxlovid more accessible across the U.S. as it projects COVID-19 infections will continue to spread over the summer travel season.
View More Stories