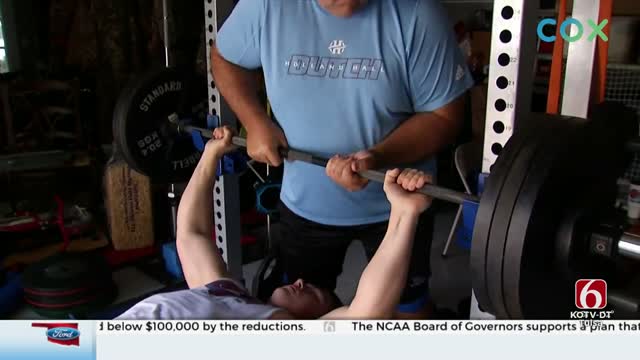 BIXBY, Oklahoma - Owen Ostroski's dad is Jerry Ostroski, the former TU all-american who went on to play eight years in the NFL with the Buffalo Bills – and Owen may follow suit.

But the man known as "Big O" isn't leaning on his son to follow in his footsteps.

The scholarship offers are already rolling in. Army, Navy, New Mexico and Hawaii are among those on the table.

Right now, Owen spends a lot of time in his garage, hitting the weights, getting ready for his final season at Holland Hall. All with dad keeping an eye on his progress.

“He's been through everything. He has been through all of it. High school, college, and the NFL, so he knows what it takes and where I want to be," Owen said.

"I wasn't even close. He is much better than I was. We didn't have this type of development when I was playing,” Owen’s father Jerry said. “Our idea of getting ready for camp was running on Tuesdays and Thursdays with the athletic trainer."

It isn't just about the physical part, Owen's priority is getting the work done in the classroom to help make his dream a reality.

"let’s get a degree. Let’s worry about that and we’ll let things fall where they may," Jerry said.