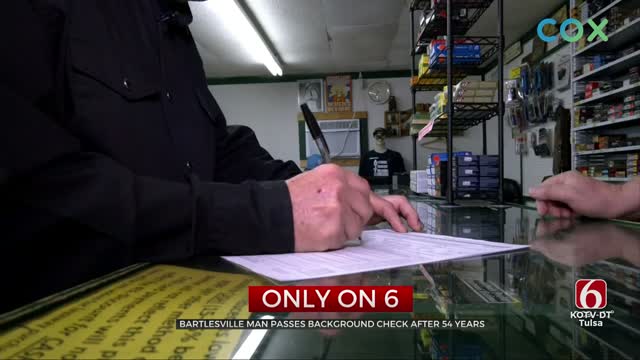 News On 6 did a story about Bill Greenway last week who has spent his whole life thinking he had a clean record until he tried to buy a gun.

He said his record should have been expunged 54 years ago, but it wasn't until he called News On 6.

Bill Greenway did something he's waited more than 50 years for. It's something he never thought would happen. He went to his local gun shop and passed a background check.

"I've spent my whole like keeping a secret I shouldn't have had to keep,” said Greenway.

Greenway said he made a mistake as a teenager and got a felony on his record.

He was told two years later, in 1968, it was wiped from his record, but when he tried to buy a gun, he failed the background check.

After Greenway called us, we learned the document that wiped his record cleaned had been sealed and we helped him get it unsealed.

"Woo Hoo! Proceed instead of denied,” said Greenway after seeing he passed.

Bill said he spent years trying to get help but before our story, he didn't think anyone cared about what he was going through.

"It got people to pay attention. I was really surprised there were so many people that cared,” said Greenway.

Greenway’s son is going to buy him a gun and Bill’s already picked it out.

He said he really can't put it into words how he feels today.

"Now it's finally happened. Like Christmas in May,” said Greenway. "People say well you don't need a conceal carry permit, I said I want one so if nothing else just put it on the wall and say look at what I got."

Greenway said he's thankful for everyone at the federal courthouse who went above and beyond to help him.