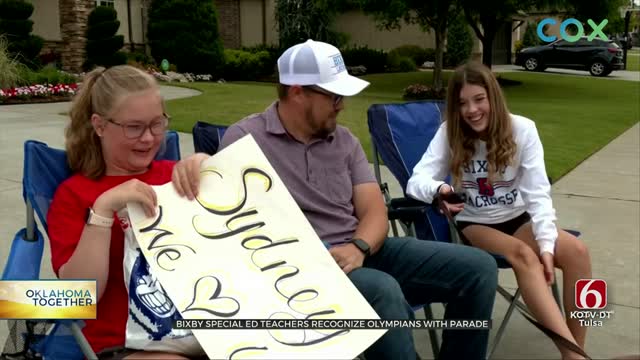 BIXBY, Okla. - Wednesday, Bixby special education teachers said the current situation didn't stop them from celebrating the Special Olympic athletes that would have been competing this week in the statewide event in Stillwater.

Since the event was canceled, the teachers wanted to do something to show how proud they are of the athletes.

Like many athletes across the state, Sydney Ashbaugh said she's been practicing and looking forward to the Special Olympics. Unfortunately, the event was canceled this year and caused disappointment for the athletes and their families.

“She’s been practicing her softball throw and I think she would have done good," said Sydney's sister Blakeley Ashbaugh.

The opening ceremony normally would have been scheduled for tonight. Bixby special education teachers said they decided to celebrate with a drive by parade.

“We’re all super sad. The Olympians are super sad. So, we wanted to do something to lift them up and let them know even though we’re not going Stillwater today we’re still going to do something special for them," said Bixby Special Olympics Head Coach Kathy Peters.

Peters said the teachers also brought goodie bags and the Special Olympic t-shirts to their athletes.

“It’s really exciting to see them come around and really take care of us almost as a family. All of us as a community. It’s really great," said Sydney's father Harry Ashbaugh.

Peters said the drive by parade will continue Thursday for the remaining athletes.