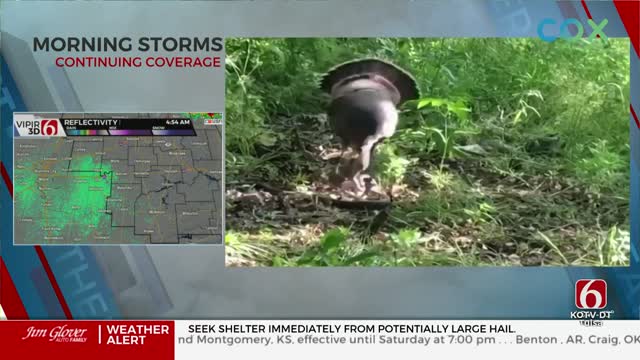 There’s not a lot a mom won’t do to protect her young, even if it means going head-to-head with a snake.

Jackson Wheat walked up to a turkey doing just that in the woods near Ardmore and started recording with his cell phone.

Wheat’s video shows a momma turkey going up a against a snake to keep it away from her nest of eggs, which was close by.

Wheat said the snake bit the hen every time she pecked at the snake, but the momma turkey refused to back down.

“The determination that hen had was unreal,” Jackson said. “She had incredible fight in her and ultimately won the battle.”

Wheat said as he moved closer to the wild bird, she would glance up at him, then go right back to fighting off the snake. He said the whole thing only lasted about five minutes before the hen killed the snake.

Wheat said he spends most of his free time in the woods or on the water, but has never seen anything like that.

“Amazing to see Mother Nature in the raw. This is what keeps me in the woods,” Wheat said.

His video has been viewed on social media more than 2 million times.

“I knew it was a rare sighting, but never thought it would go viral. [I’m] so glad that people can see this experience,” said Wheat.