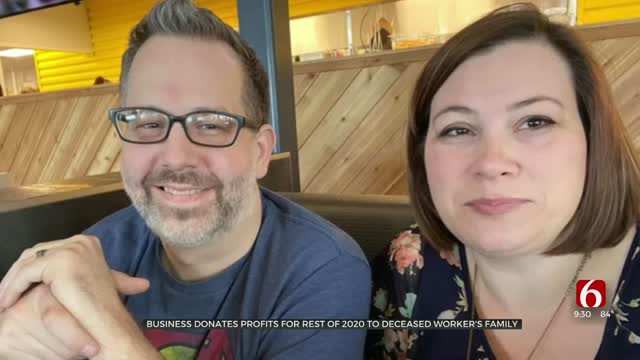 A business is donating its profits to an Owasso woman who is going through an incredibly difficult year.

Angie Combs lost her husband to a heart attack, leaving her to care for their four children alone. Angie's husband worked at Christian Brothers Automotive.

The company has vowed to not take a dime from the Owasso location so it can give back to the family.

Angie Combs said her husband Skylar Combs was a dad who everyone loved.

"The rock, the dependable one," she said.

She said they met in 5th grade.

"I did not picture four kids and 22 years later," Angie said.

Skylar worked at Christian Brothers Automotive in Owasso for 6 years.

Franchise owner Ray Adcock said he could never have asked for a better right-hand man.

"He was a talented, magnetic, had a lovable personality everyone was drawn to," Ray said.

Angie said Skylar died from a massive heart attack on his way to work in January, which was also their son's 6th birthday.

"He's like, 'Dad's in heaven now. We now share a birthday.' For him, the start of heaven is his new birthday," Angie said.

Angie was suddenly a single mom with a limited income.

But the CEO of Christian Brothers called Ray and told him all the money they usually take from Owasso's shop would instead go right back to Angie and her family for the rest of the year.

Angie got her second check a few days ago. She said she sat down and cried.

"Flowers or a card would have been generous and wonderful," she said. "To do this is just, it's incredible."

Ray said Skylar blessed everyone he met, and now his company gets to give that back.

Christian Brothers said the pandemic did slow down business considerably but they're hopeful they'll still be able to give a lot back for the rest of this year.