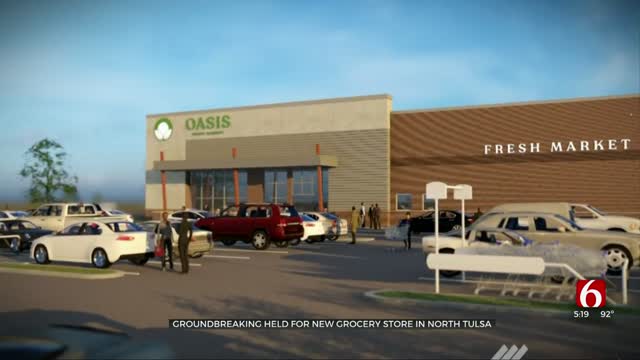 People who live near Pine and Peoria will soon have a grocery store in their neighborhood, after years of pushing to get one in the area.

What's become known as a food desert saw new life Friday, as 17 shovels went into the ground, marking the ceremonial start of construction. Heavy equipment is expected to be on the property early next week.

"Overjoyed, just happy as I can be,” City Councilor Vanessa Hall-Harper said.

Hall-Harper and others have pushed for years to make the moment happen.

The "Oasis Fresh Market" will cost nearly $4 million. Hall-Harper said finances were the main challenge to make the grocery store a reality.

"We had a funding gap. Our philanthropic partners came and said look, we want to be able to help, and I appreciate that,” Hall-Harper said.

Inside, shoppers will find meat, produce, dairy, and a walk-in beer and wine cooler.

The store will also have a demonstration kitchen, with the goal to provide education to customers looking to cook affordable, healthy meals.

"If you can't tell by the number of people who showed up today, this is about so much more than a grocery store,” Mayor G.T. Bynum said during a press conference.

"It is more than a grocery store. It's a life resource,” Tulsa resident Richard Baxter said.

Baxter lives just two minutes away from the site where the new store will be. He said he usually travels at least 15 minutes to get groceries for his family.

Baxter has neighbors who don't have their own transportation, making grocery shopping even more challenging for some. He looks forward to the day he sees change.

"I'm excited. I'm excited to see the construction, the development, and the change that not only North Tulsa, but our whole community, is going to have,” Baxter said.

Construction is expected to wrap up next spring.