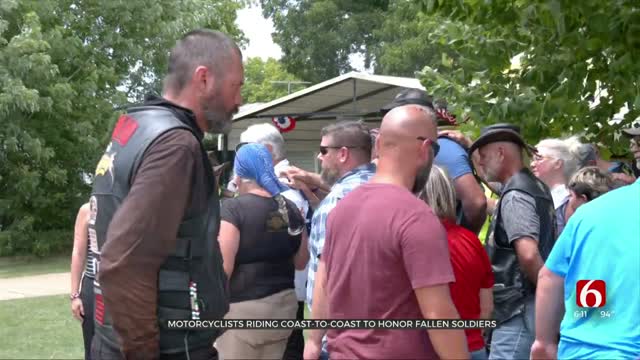 A group of motorcyclists are riding from coast to coast carrying the 'Flame for the Fallen' and paying tribute to those who gave their all for our freedom.

The group plans to visit nearly 60 homes in 13 states. It's a 22-day cross country commitment, and two of those days were spent in Tulsa, in what one fallen Marine's mother describes as an unforgettable experience seeing people pay it forward. These men may have fallen, but they will never be forgotten.

Sergeant James Graham III, nicknamed Bluebird back in Boy Scouts, died in Iraq in 2005 while serving in the U.S. Marine Corps. James' mother Katrina Graham said her heart still hurts, but she knows James is here with her every step of the way.

"Not an hour that goes by that he's not there. We still miss him desperately,” said Katrina Graham, Gold Star Mom.

Katrina described James as leader, a family man and someone who fought for everyone.

"He was for the underdog,” said Katrina. “If you were being picked on, he was the one that was going to take care of it."

She said James' legacy lives on through his children, and she sees a glimpse of James in her grandchildren every day.

Katrina and her husband Randy said they are so grateful that after 15 years, groups like the Fallen Soldiers Northwest are still saying his name and remembering James as a man with a servant's heart.

"It's tough. I am not a crier, but I've cried more on this trip because it hits you,” said Bonni Miller, Tribute to Fallen Soldiers Northwest. “It hits you. You feel it because these families have lost so much. You know, this is the least I can do."

James’ friends described him as a buffer between fear and the team. Bobby Conn served in the Marine Corps with James. He said that James lives in every one of them.

The Fallen Soldiers Flame will be escorted onto the grounds of Arlington National Cemetery on August 2, followed by the announcement of every fallen service member's name who was honored during the journey.