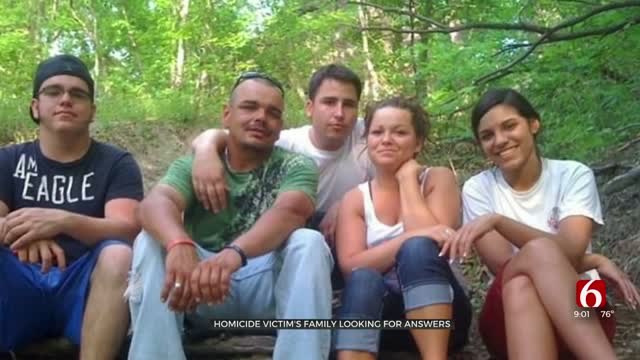 A grieving Green Country family is pleading for answers after a dad of five was shot and killed over the weekend.

Daniel Morgan's family said he was a friend to all, a great dad, and a hard worker. Now, they're pleading for justice.

"He had 5 beautiful kids," said his mother Rhonda Skelly.

Daniel Morgan had his life cut short Saturday. Tulsa police said he was shot and killed outside a home in East Tulsa.

"It all stems down to just pure evil," Riley said.

"He always wanted us together," Riley said. "That was his biggest goal, was for us to be together."

Riley said Daniel worked hard at his job as a roofer and loved Jesus. His brother Mikey Martin said Daniel was his role model.

"I get my work ethic from my brother," Martin said. "He was the hardest working person I know."

The FBI issued a first-degree warrant for Kyle Sago. Investigators said Sago shot Daniel several times from his truck. The family said Daniel and Sago knew each other but they don't know a motive. Sago has served time in Oklahoma prison for drug and escape convictions.

Riley said Daniel was a proud member of the Cherokee nation and because the crime happened on Creek Nation land, based on the U.S. Supreme Court's recent ruling identifying Indian land boundaries, it's a federal case.

His family members grieve the loss of someone they say is gone too soon.

"I wouldn't want anybody else to go through this at all," said Riley.

There is a GoFundMe link to support Morgan's family, you can find that here.

If you have any information on the murder or Sago's whereabouts, call Crimestoppers at 918-596-COPS.