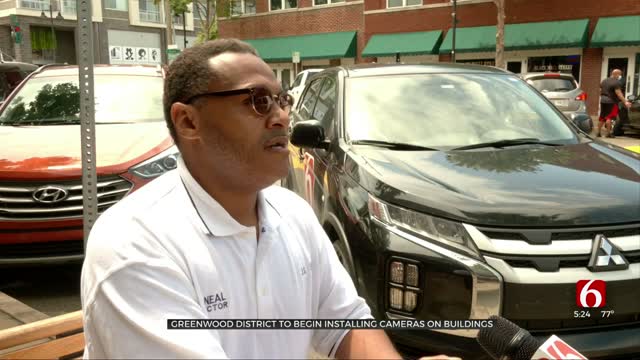 A Tulsa group is working to install cameras on buildings in the historic Greenwood District.

The move comes after someone painted a blue line across the "Black Lives Matter" street painting on Greenwood Ave.

CJ Webber-Neal, president of the Greenwood Arts and Cultural Society, said that donations, along with permission from the Greenwood Chamber of Commerce, made installing cameras possible.

"We're going to try and set one camera on the rooftop area that'll actually be facing, and then set another two cameras maybe three cameras in some of the windows and shops of the local businesses here,” Webber-Neal said. "We've got cameras that are set up, most of those are going to be wireless cameras, and they're going to be patched into phones. If there's something where there's any kind of motion that sets off the camera, someone will be alerted.”

Oklahoma Democratic Party chair Alicia Andrews said until there’s a decision about whether the "Black Lives Matter" message stays or goes, something like this needs to be done.

Webber-Neal said he understands there are people who disagree with the message but said the meaning behind it is clear.

"It is saying that people in this community realize that there's a problem with systemic racism, and unfortunately people have not taken the necessary steps to fix that,” Webber-Neal said.

The city council will discuss the future of the display next Wednesday.