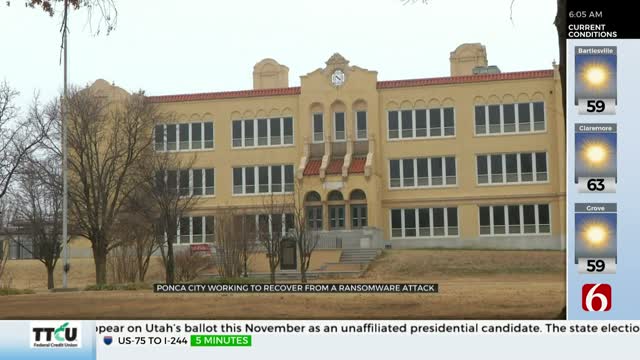 Ponca City Public Schools is working with the Federal Bureau of Investigation after being hit by a ransomware attack over the weekend.

Ponca City's Superintendent, Shelley Arrott, said they discovered the ransomware attack on Saturday. In a video posted to YouTube, Arrott said she did not want to disclose the hackers demands since the FBI is investigating, but that the district did not pay the ransom.

The district said it had backup files on an external server. They are working to restore those files but admit it could take weeks. The specific system hit by the attack, PowerSchool, is up and running as of Monday morning, but anything built in that system after August 10 must be rebuilt, including 200 schedules at the high school.

Because of the attack, the school board voted to delay the start of the school year. Instead of starting Wednesday, August 19, Ponca City students will now go back to class on Monday, August 24.

"It's not fair to our kids if we have a haphazard start. PowerSchool determines our schedules [and] provides parent information to us. It's going to be a challenging year as is with COVID-19," said Superintendent Arrott.

The district wants to stress that no student, personnel, or financial information was compromised in the attack since the effected files impacted were encrypted, not stolen.

To watch the six-minute update from Superintendent Arrott, click here.