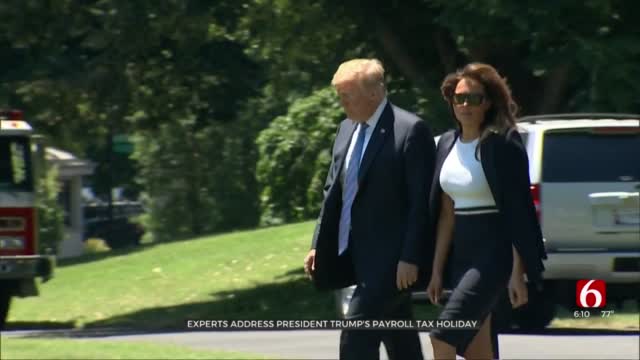 A lot of people will get what looks like a pay raise soon as President Trump temporarily defers social security taxes, but it may just be temporary.

The president’s announcement affects what employees pay into social security, money that for most people is withheld from their paychecks. The president is delaying that tax but has only promised to eliminate it if he is reelected.

President Trump’s announcement created a situation where taxes don’t have to be paid now but will be paid later.

“I’m providing a payroll tax holiday for all Americans earning less than $100,000 a year, meaning bigger paychecks for families through the end of 2020,” President Trump said.

The fall tax deferral applies only to the 6.2% social security tax withheld from paychecks. It's being deferred from September through December, but employers have the option to continue withholding, because as of now, it does have to be paid in full starting in January.

That conflict created lots of phone calls for the accountants at Hood and Associates.

“We just need to make people aware, it's a great thing, to get some money back into the economy while people are hurting,” accountant Paul Hood said.

Hood encourages employers to keep withholding the tax to wait and see what happens.

“Our recommendation for employers is that you go ahead and withhold from employees and put it in a savings account, with complete transparency,” Hood said. “Then if Trump is re-elected and he makes it permanent and we don't have to pay it back, you can write employees a check as a good little bonus next year to give them those taxes back."

The reelection equals forgiveness equation comes directly from the President.

“When we win, when I win the election I'm going to completely and totally forgive all deferred payroll taxes without in any shape or form hurting social security,” President Trump said. “That money is going to come from the general fund.”

If employers don't withhold the money and it's not forgiven, employees will have to pay twice as much social security taxes for the first four months of next year.