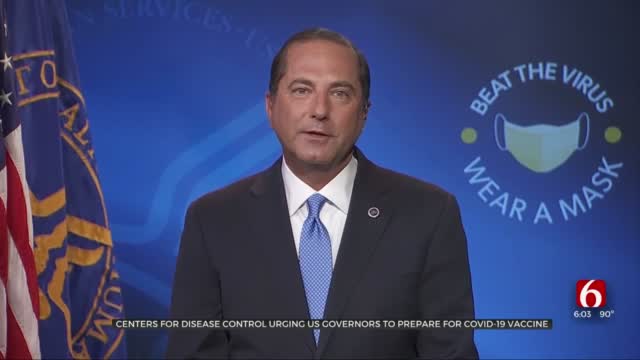 The Center for Disease Control is urging Governors across the United States, including Oklahoma, to be prepared for the distribution of a COVID-19 vaccine by November 1 in a new document.

The document was sent out last week on August 27.

In the letter, written by CDC Director Dr. Robert Redfield, the CDC provided some major updates about a potential vaccine.

Dr. Redfield said the CDC has contracted the McKesson Corporation to distribute hundreds of millions of doses nationwide.

In the letter, he asked Governors and state health departments to expedite permitting and licenses that the company would need to open distribution centers. Since the government is wanting to get a vaccine out as quickly as possible, Redfield said permits present a significant barrier.

The letter said the company hopes to have these distribution centers fully operational by November 1, which happens to be three days before the presidential election.

Several vaccines are in clinical trials right now, but some democrats worry this could be politically motivated.

Health and Human Services Secretary Alex Azar said Thursday though that is not accurate, and no vaccine will be approved without sound data and science.

“It has nothing to do with elections,” said Azar. “This has to do with delivering safe and effective vaccines to the American people as quickly as possible and saving people's lives.”

"The Governor and his team will work with the CDC and our local jurisdictions to do whatever we can to expedite delivery of these services,” Gov. Stitt’s office said.

Gov. Stitt Renews Call To Reduce COVID-19 Spread, Says “We All Have A Role”