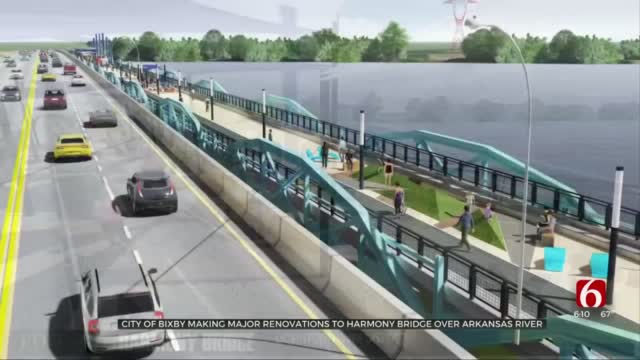 The City of Bixby is making major improvements to Harmony Bridge over the Arkansas River with phase two of renovations starting next week.

The city said it’s important for people to know the bridge will be closed for months to come.

This weekend is the last chance to walk or cycle across Harmony Bridge before it closes on Monday, and the city urged people to take the closure seriously.

The update promises to transform the old bridge from just a way to get across the river, to a place to gather.

"It'll definitely be a destination, there's going to be events there, there's an area where food trucks can line up so people can actually enjoy having a meal, having some music, and having a good time with family," said Jennifer Rush with the City of Bixby.

Rush said it will be one of the first linear parks in the area, but before the public can enjoy it, a lot needs to happen.

"Monday will be the day we start officially locking the gates,” Buster Butler with Myers-Cherry Construction said. “No more pedestrians will be allowed just because of the safety while working on the bridge.”

Butler is telling people to respect the closure because the work they'll be doing could be life-threatening to anyone not part of the construction crew.

"We'll be actually taking areas out from the deck itself and they'll be exposed potentially to the river, so that's the main reason we don't want anybody on the bridge," said Butler.

Workers are installing a gate to keep people out, but Jennifer Rush said that didn't stop people during the first phase of the project.

"Some people ignored some of the fencing and would get across, jump over the fence and the gate, but it's very important that people stay off during this time," said Rush.

The bridge, with all its new updates, is expected to open back up sometime next summer.

Center For Public Secrets To Showcase Art Made During Pandemic