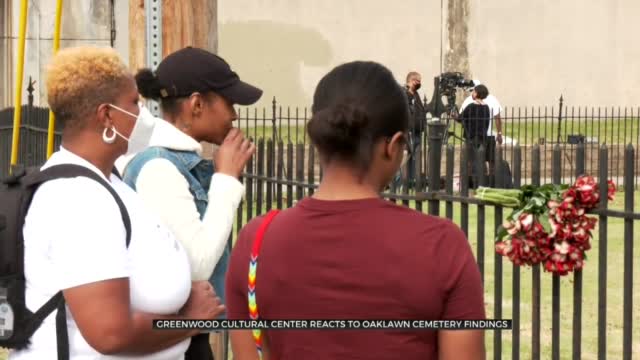 Experts directly involved in the mass graves investigation said it is too soon to connect the mass grave found this week at Oaklawn Cemetery to the 1921 Tulsa Race Massacre.

Greenwood Cultural Center Program Coordinator Mechelle Brown recognizes there is still a lot of work to do, but said the center believes the remains of victims were found this week.

The center has been working since the 90s to preserve and share the history of African Americans in Tulsa.

"There's some results and it just validates what the witnesses have said, what our survivors have said for so many years,” Brown said.

"It's too early to know. But personally, I'm optimistic,” Historian and professor Scott Ellsworth said during a news conference Thursday.

Ellsworth, who is from Tulsa, recognized this week as a historic moment for the nation.

"This is the only time any level of American government, municipal state or county has ever gone out to search for the hidden remains of victims of racial violence in American history,” he said.

Brown said Tulsa may set an example to other cities to learn more about their history of racial violence, specifically, the cities that saw race riots during what is known as the "Red Summer of 1919."

"This may inspire people to start doing more research and asking more questions and demanding that something be done to identify the victims of massacres that have taken place across the country,” Brown said.

The Greenwood Cultural Center encourages people with information, pictures and documents relating to the massacre to mail those things in or give them a call.