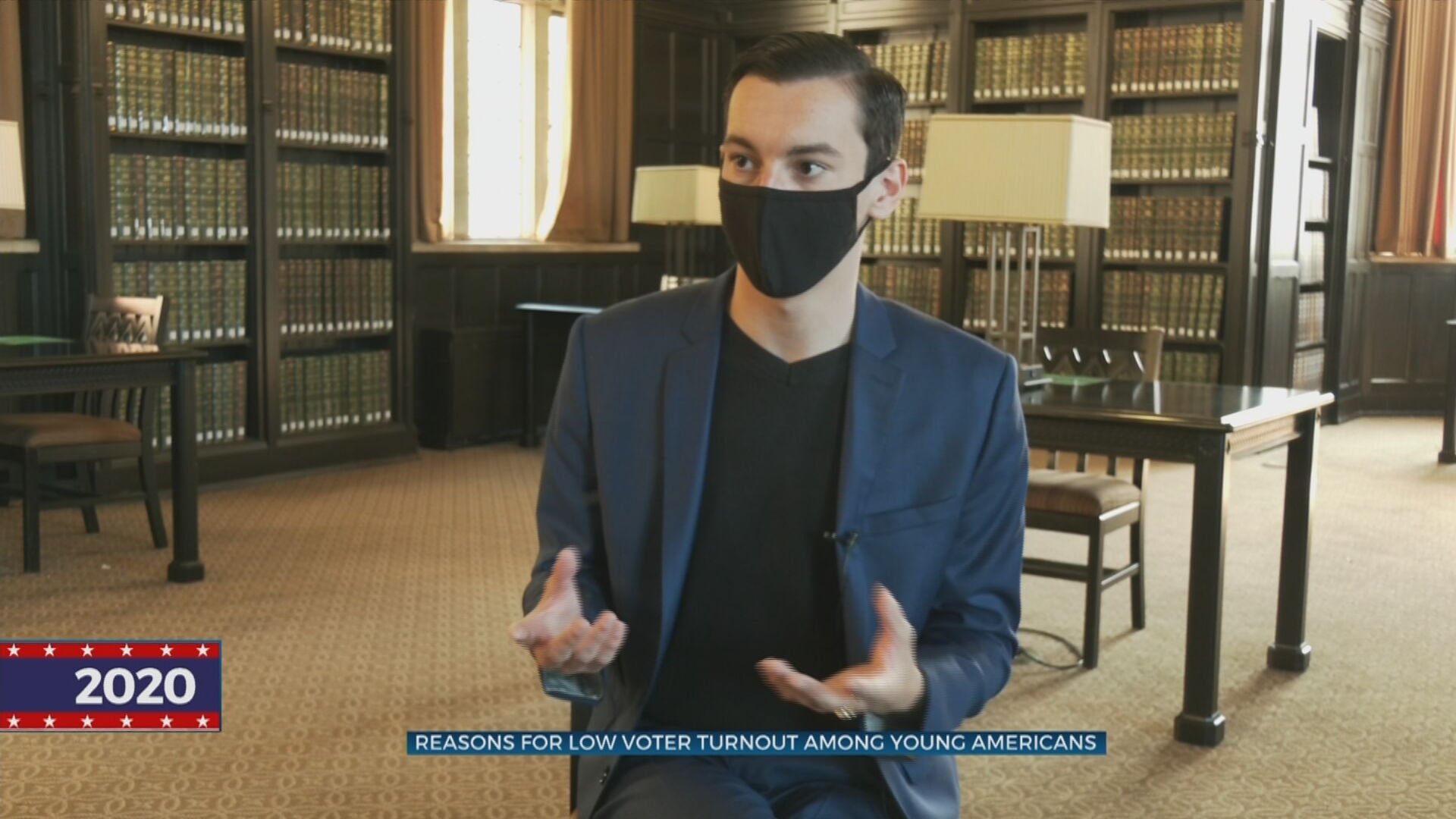 Less than half of Americans ages 18 to 29 voted in the last presidential election, but this year may be different. Political experts said that the lack of young voter turnout shouldn't be blamed solely on apathy.

OSU Associate Professor of Political Science Dr. Erica Townsend-Bell said the United States sees around a 20-point gap between younger and older age groups on any given election year.

Dr. Meg Myers Morgan OU Assistant Professor of Political Science, said the United States has the lowest youth voter turnout. Only, this year may be different.

“Since the 80s, less than 50% of the young voters have voted in the presidential election if you can imagine that,” said Dr. Myers Morgan. “What we saw in 2018 when there was actually a blue wave and the democrats took back the house was that there was about a 20% increase in young voters. So, they’re thinking that a lot of that is because of their interest in some of the bigger political [social] issues that are on the rise.”

We've heard it time and time again: “They're too young. They don't care. The real world will be their wake-up call.”

"There are algorithms that's attached to any of your social media feeds and so we have to be very careful,” said Dr. Myers Morgan.

Dr. Townsend-Bell said campaigns have grown increasingly sophisticated, and TU junior and TU's College Republicans Chairman Evan Shaw added to that, saying many people will see a headline and impulsively post it without reading the full story.

“It’s very easy to respond directly from short, easy news media, whether you get your news from Twitter or social media or the news networks," said Shaw. "I think that it’s very easy to react to that without taking a deeper delve into the issues. It thinks it’s also easy to look at the parties and do straight-line voting and think your job is done.”

Dr. Townsend-Bell said there are many types of political participation like protesting, petitioning, putting out signs and calling one’s representative. She said that this is one area where we see young people heavily involved.

"More concrete kinds where it feels more to the individual like they've done something that makes a difference that they can sort of see, or sort of envision as sort of moving the needle,” said Dr. Townsend-Bell. “Those kinds of political participation are more compelling to the young.”

Dr. Townsend-Bell said one of the reasons young voters might feel this way is because the country as a whole hasn’t done a great job of modeling what it is like to engage in and discuss politics across a population of people with a wide range of political beliefs without it being conflictual.

“One suggestion for why you don’t see participation among the young is that they haven’t actually been socialized in terms of how to do that,” Dr. Townsend-Bell said.

She said not voting or even voting in a particular way can also be classified as forms of protest.

Roman Shelton is the president of the College Democrats of Tulsa and a sophomore at the University of Tulsa. He said many Americans are just tired of political polarity.

“People get voter fatigue. They get tired of always hearing about the election," Shelton said. "You know, you can’t get on Facebook, Twitter, Instagram, or even turn on the TV without hearing an entire slew of just attacks against just one candidate or seeing another advertisement you’ve seen a million times before.”

Shelton said we’ve always had partisan divide but that social media, in part, is to blame for the current increase. Shelton said it’s easy to think that, without question, you and your candidate of choice are 100% correct 100% of the time.

He said this becomes especially evident when surrounding yourself with people and sources that align with you. Shelton believes politics can be overwhelming for many.

“I think one of the reasons why people are apathetic is because they feel that their voice doesn’t matter,” said Shelton. “Imagine being a republican voter in California or a democrat in Alabama, or really a libertarian in just about any state. It’s easy to feel like your voice doesn’t matter.”

He said it’s not just one person who feels this way, but say, one million people who feel this way. Shelton said that if one million or however many million people decided to vote, it would make difference, and a big difference at that.  Shelton said young people like himself make up roughly a third of the population, so they still need to step up.

"The youth vote has to be the most diverse group of voters in this electorate,” said Shelton. “That is, they have a wide variety of interests, wants and needs in this election, and different outlooks on all the different issues.”

He said it’s very difficult for a candidate to appeal to a large majority of the youth vote, but that’s where research comes in to play. Shelton added that the youth vote could be a catalyst for change and a turning point in elections whether it’s on a local, statewide or national level.

TU's College Republicans Chairman Evan Shaw said if his generation wants to see change, they need to be the change.

“We see so many major issues in the world around us that we want to make sure that we address. Politics is encompassing of every climate in our world from the social issues to the scientific community. You see a lot of discourse about constitutional rights, as well,” said Shaw. “It really becomes a question of what are our fundamental core values and then how are those reflected in our political belief systems so that we can make sure that our core values are represented in our everyday life.”

Both Shaw and Shelton agree that it is important to get involved and said that it is easy to do so.

Shelton said you can volunteer for a party and drop off information at homes across your area, or you can go to your representative’s office and offer your services.

“But I think the easiest way to get involved is just to pick up your cellphone,” said Shelton. “If you go to President Trump’s website or Joe Biden’s website then there’s going to be sections on there to get involved and to make calls for these candidates.”

“It’s a global phenomenon,” said Dr. Townsend-Bell. “If you put Mickey Mouse on a ballot, he’s going to get a decent amount of votes.”

Shelton said party voting can be dangerous because you’re assuming all candidates who affiliate with a particular party are the same, but there are deviations. He said voting for a candidate without knowing who they are or what they stand for is like writing them a blank check to do what they want with foreign policy, trade, the economy, and many social issues. Shelton said, in this case, you could end up electing someone who doesn’t represent you well.

“When it comes to getting educated, you have to really dig in and research your candidate, and it’s still easy. I mean we live in the age of the Internet, so we are very lucky to have as much information at our disposal as possible,” said Shelton. “You can go to a candidate’s website to see where they stand on all the issues. You can listen to them speak. You can look at them give a speech online, but you also have to look at a candidate’s record and how they voted recently. What have they done and is what they’re saying consistent or inconsistent?”

Dr. Townsend-Bell said the young vote is of interest for a variety of reasons and that these newer generations will be particularly interesting to follow.

“We’re in a particular moment in the United States where we kind of keep waiting for the tea leaves to reveal to us where we are heading,” said Dr. Townsend-Bell. “The boomers are starting to age out. That process is going to continue to unroll for the next 20 years. Are we going to see more states turn purple? Are we going to see more youth get engaged in politics and begin to become more of a central part of that conversation?”

She said, as you head to the polls, remember that it’s important to also vote in the local elections and to take those seriously, as well.

“If you’re concerned about the things happening in your community, why is the education system the way that it is, why is it difficult for me to access healthcare, why is it difficult for me to get to the grocery store, where are the street lights, or any of these kinds of questions, how can we get state funding for X, Y or Z, those are places where you can make your voices heard at the local level and where you can make meaningful differences," said Townsend-Bell.