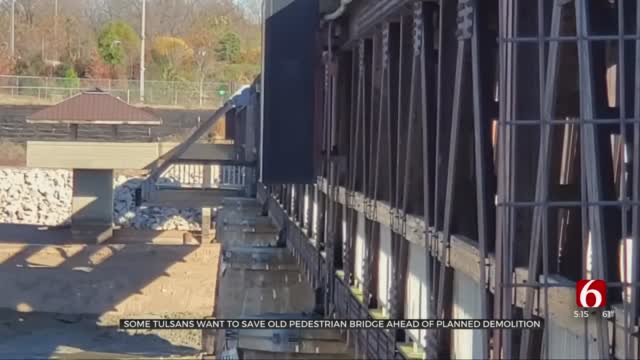 Tulsa’s old pedestrian bridge over the Arkansas River will be demolished next year, when the city starts work on a replacement bridge, but a growing number of supporters want the chance to save the old bridge.

It was an old railroad bridge, repurposed as a walking bridge, and though it’s survived time and floods, the City of Tulsa said it can’t last much longer.

A century old pedestrian bridge over the Arkansas River is due for demolition next year, but a Tulsa man has started a petition drive hoping to save it. Jonathan Pinkey believes it could be saved, and the City would save money at the same time. The City disagrees, having studied the bridge and determined it needs so many repairs, the work would cost almost as much as a new one, without gaining anything in capacity or capability.

"Maybe it's not an either or issue," said Pinkey, who suggested the City could save the historic bridge, and build the new one as well. "We could have a historic protected bridge, with the new bridge."

Pinkey has almost 500 signatures on his petition to save the bridge.

The replacement was intended to have a shaded canopy, but cost estimates resulted in that part of the plan being changed to smaller shady spots scattered along the bridge. The design isn't finalized, according to Paul Zachary, the supervising engineer for the City of Tulsa.

The east end of the bridge has already been demolished, and Zachary said when it was, the structure crumbled with one hit.

"It confirmed everything we had from the engineering reports" he said, noting studies had shown the cement supports for the structure have no reinforcement, while the trusses are rusting away.

Zachary said before making the decision to demolish it, the City studied the bridge from top to bottom.

"Our goal was to reuse this bridge and that's what we wanted to do, but we started to look at the cost of it," said Zachary, who said bringing the bridge up to modern standards would cost almost as much as a new bridge. "We don't want it to be functionally obsolete the day we spend $20 million on it."

Zachary said the contractors hired to demolish the bridge are waiting on a final permit, which likely would come in January.

Pinkey still hopes he has a chance to change some minds.

"If they don't demolish it and give it chance, we might end up with a great, historic bridge, we could have a 200 year bridge," Pinkey said.

You can find a link to the petition here and learn more about the bridge here.