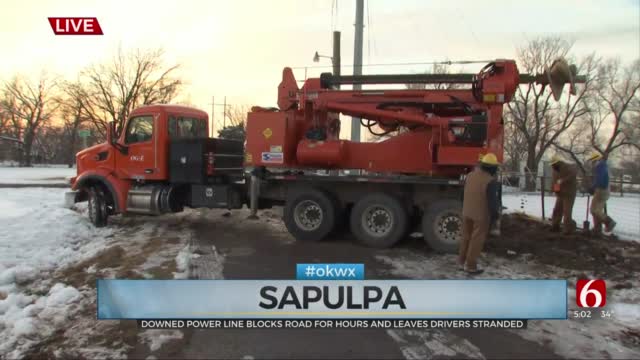 Hundreds of drivers sat for hours on the Turner Turnpike at Sapulpa on Sunday as a downed power line blocked the road which didn’t fully reopen for more than 12 hours.

That line fell across the highway and the only close off-ramp at noon and well before dark, people were getting desperate.

Work continued into the evening on Monday repairing a downed power line that blocked traffic on the Turner Turnpike for up to 12 hours Sunday.

A semi entering the turnpike on ramp struck a high voltage transmission line that was sagging, pulling it down on the interstate just before noon. The line blocked the ramp and the highway, leaving drivers unable to move forward or exit.

When the truck struck the line, it pulled over a large pole at 9th and Fern in Sapulpa. The lines fell on the interstate around a car, which just missed being struck, and right in front of a semi that braked and swerved to avoid them.

Kate Burghoff was driving east towards Tulsa, when traffic stopped.

“Pulling up to it, I could tell it was, I assumed a wreck because of the snow. But 45 minutes go by and I haven't moved, at all,” said Burghoff.

She was stuck just back from the exit for five and a half hours. Traffic backed up for miles in each direction and the highway wasn’t fully reopened until 1 a.m. Monday.

Burghoff said people desperate for a bathroom starting going towards the fence line of the turnpike “just so they could have some distance between them and the thousands of cars that were just watching everything go on.”

OG&E Senior Communications Specialist David Kimmel said ice and snow on the lines could be a factor in making the lines sag before they were pulled down by a semi.

After the power company moved heavy equipment to the scene from Shawnee, the lines were being lifted when, according to Kimmel, a west-bound semi entered the work zone and pulled the lines down a second time. That setback left the interstate partially closed for five more hours.