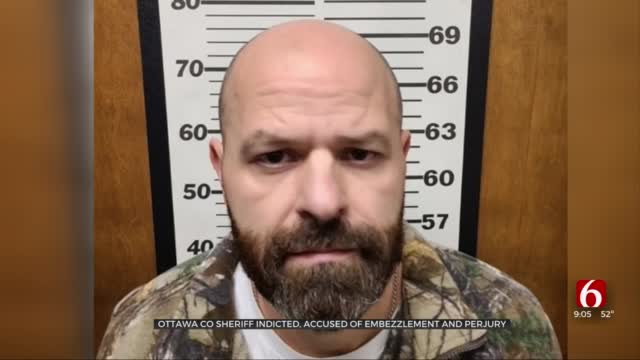 Ottawa County Sheriff Jeremy Floyd has been indicted, booked into jail after being charged with embezzlement.

A state audit said while Floyd was sheriff, numerous laws were broken when it comes to finances and during a three year period, his fiscal management led to the need for the county to give his office an additional $435,000 in taxpayer money.

Despite all the audit’s findings, Sheriff Floyd is charged in connection with spending county money on a plane ticket for his wife.

Sheriff Floyd was arrested by the Miami Police Department on a warrant, but the Ottawa County Sheriff's office confirms Floyd has bonded out of jail. A grand jury indicted him on a count of embezzlement and another count of perjury.

"It gives a black eye to your county. It makes all your elected officials look bad,” Ottawa County Commissioner Chad Masterson said.

The indictment accuses Sheriff Floyd of spending more than $1,000 of taxpayer money for an airline ticket for his wife, to go to a sheriff's conference in Reno, Nevada back in 2018.

The Oklahoma State Auditor and Inspector's Office details its own years-long investigation in a 32-page special investigation audit completed this summer.

The audit said it found of the more than $3,000 paid for the trip, $1,132.78 was spent "in violation of the law." It said the sheriff used the department's credit card to pay for hotel and airfare upgrades for himself and his wife, along with a plane ticket, conference registration fees and meals for his wife.

The audit provides a response from Sheriff Floyd, which says, "he believed he had paid for all of his wife's meals and that the room upgrade was to get away from the smoke of the casino."

The report also said in an interview with the sheriff, he offered to reimburse the county for the expenses of the trip. Masterson said Floyd did not make an offer to the commissioners to do that.

"We have a budget also that we have to stay within. Sometimes, you know, I'd like to have all new everything but the money's just not there,” Masterson said.

Masterson said because Floyd is an elected official and innocent until proven guilty, he will remain the sheriff unless he resigns. News On 6 called Floyd’s attorney for comment but did not hear back. The incoming sheriff, David Dean, is set to be sworn in January 5.

You can read the full state audit report here.