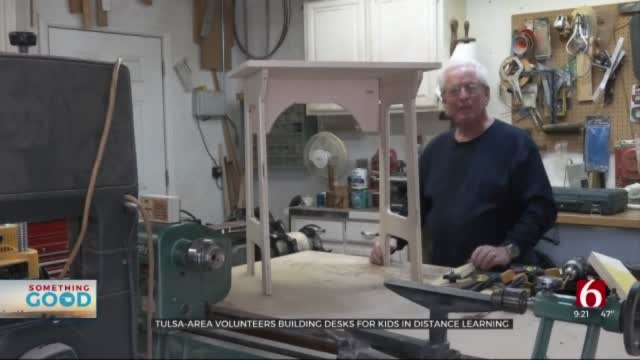 Some Tulsa-area friends and volunteers are on a mission to build and give desks to kids in need as they learn from home.

Inside John Fisher's shop are some handy skills, a few screws, a saw, and a simple design that creates digital learning desks.

"A speck of snow is now a big snowman," Fisher said.

Fisher said he saw a story on the news a few months ago about a man making desks to help kids learn virtually.

John and his friends have been volunteering for Habitat for Humanity for 25 years and are the "Tuesday Morning Miracle Workers.” Together, they've built 250 homes.

"We learned a number of skills in cabinet making, woodworking," said Kent Powers.

So, they took it upon themselves to tackle the new need.

Home garages have become the workshops for these desks, which the group creates and designs using their own materials. Those materials so far have been fully paid for by the dozen men making the desks and giving them away.

"We're up to 30 desks at this point, but we're looking to take the next leap," Powers said.

"A lot of these children don't have a place in their home to call their own," Fisher said.

Each desk has a nook to store books and laptops, and a message encouraging the kids to decorate and personalize them.

The men have now partnered with Habitat For Humanity and are looking to get a grant from Home Depot to build even more desks.

"The giving part of it is so rewarding because we see happy faces," Fisher said.

The group welcomes anyone to help with desk making; they'll provide the education, templates, and materials, and of course, people can donate money too. They're also looking for people who need desks.

To reach out, email the group at TuesdayMorningMiracleWorkers@gmail.com.