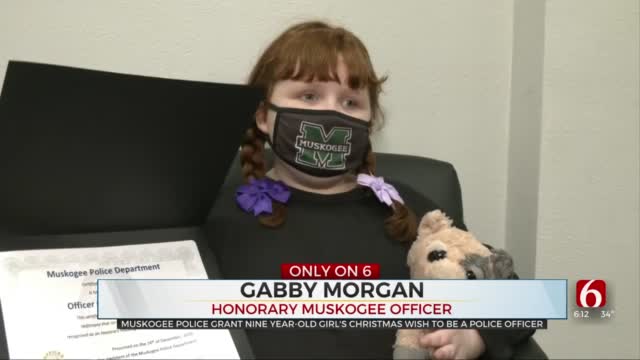 A Muskogee nine-year-old girl who has fought through a rare disease, wanted to be a police officer for Christmas. Muskogee Police made that wish come true on Christmas Eve.

Gabby Morgan has always dreamed of becoming an officer because she said they help people. So, Muskogee PD heard her wish and decided to make her an honorary officer.

"It feels so good for my dreams to be coming true now. It's a miracle!" Gabby excitedly told News on 6.

Gabby's parents say her being alive truly is a miracle, because when Gabby was just a year old, doctors diagnosed her with a rare vascular disease that made it difficult for her to walk or talk.

"Her first year she spent in and out of the hospital, she was really pale and yellow," said Gabby's dad, David.

She recovered from that, but then doctors found a benign tumor in her brain this past year and her parents didn't know if she would be out of the hospital by Christmas.

"It was surreal, it felt like a dream. I just prayed to God everyday it wasn't cancer," Gabby's mom, Lacie said.

On Christmas Eve, Gabby got to put her illness aside and played the part as top cop in Muskogee. From touring the department, to sitting in a police car, to getting to meet Chief Johnny Teehee and give him a high five.

Chief Teehee told News on 6 the day was just as much a gift for officers.

"Everybody wants to think it's just the rough and gruff guy with a badge and a gun on, but when there's kids involved it melts their hearts and these guys, they love doing stuff like that. So, it was special for all of us," Chief Teehee explained with a smile.

Now, Gabby is not only showing her bravery with her scar, but also with a badge and the memory of a lifetime.

"I feel like I'm going to cry, because I'm so happy," Gabby said.

The Muskogee Police Department said they are also working to get Gabby her own uniform and let her ride in one of their police cars once she's feeling better.