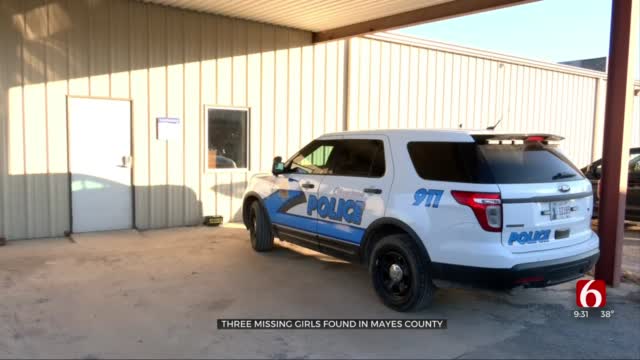 Three young girls who were missing from out of state are safe on Christmas after a Chouteau police officer found them in a car with two older men during a traffic stop.

Chouteau police believe the three girls were being trafficked by the men - saying it is likely part of a much larger human trafficking operation.

It originally started when the officer pulled a car over for speeding on Highway 69.

Matt Perryman, the department's public information officer said, "You know I hate to use the cliché, 'routine traffic stop,' but once the officer actually made contact with the driver he realized their stories weren't lining up of where they were going."

The officer's gut instinct turned out to be correct as the three girls, all younger than sixteen, had been reported missing. Two of them were from New Jersey, and one was from Illinois.

"After we started the investigation, we realized that it turned into a bigger case than we anticipated," Perryman said.

Perryman said that they believe the two men caught with the girls are part of a human trafficking operation well beyond state lines.

The girls are now safe in the custody of the Department of Homeland Security. DHS broke the news to their three families that they would finally get to see their daughters again.

"Luckily, this officer you know followed his gut and further investigated and really did an outstanding job for our department and for these three families," Perryman said.

The look into the trafficking operation has only just begun. DHS, ICE, and several other agencies will join Chouteau Police and the Mayes County Sheriff's Office on the investigation.

Both men found inside the car with the girls are in the Mayes County Jail without bond.

Their names have not been released.