Pres. Trump Takes No Responsibility For Riot; Responds To Removal From Office Efforts 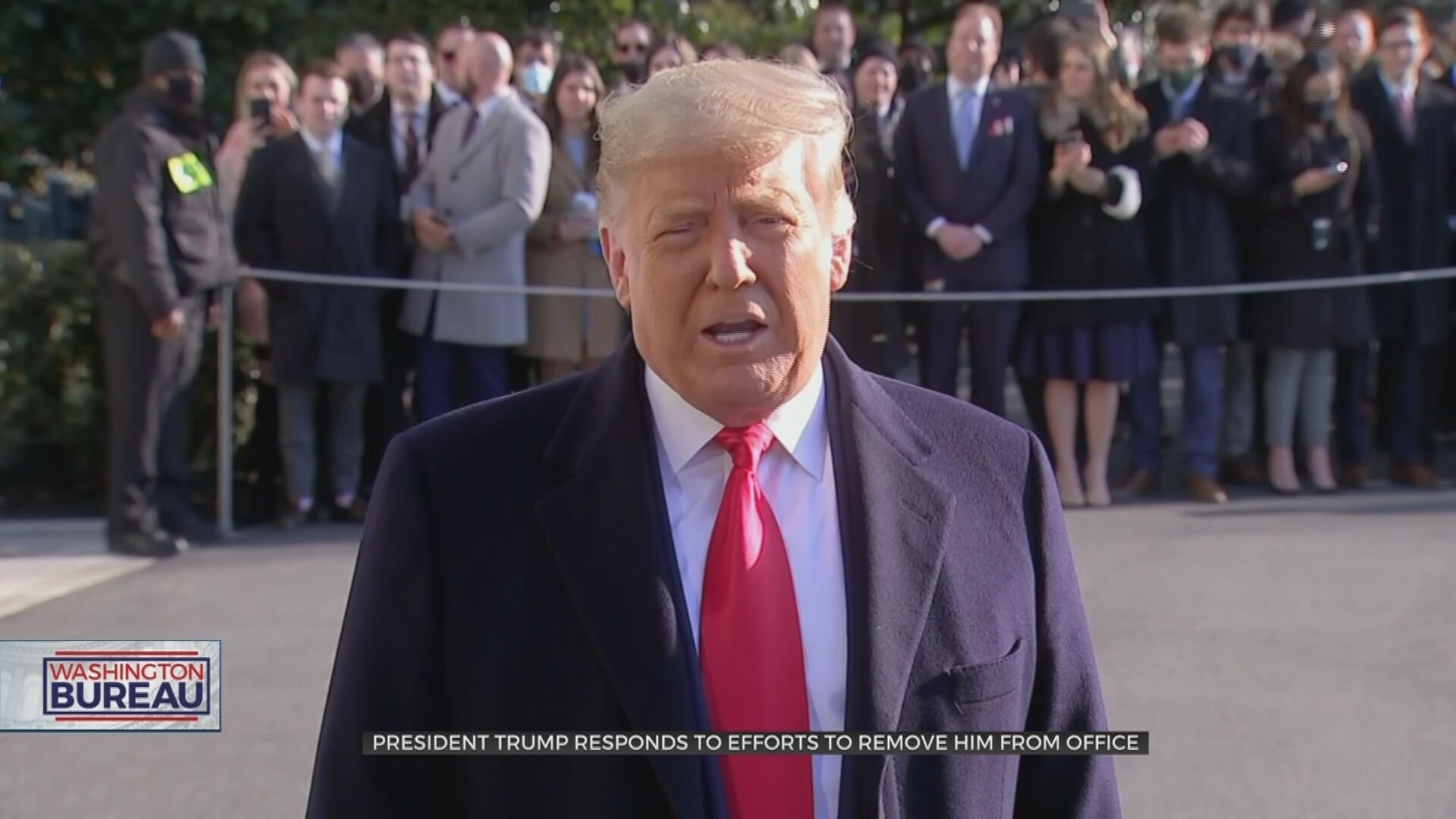 President Trump Takes No Responsibility For Riot, Responds To Removal From Office Efforts

Facing an unprecedented second impeachment, President Donald Trump on Tuesday took no responsibility for last week's deadly assault on the U.S. Capitol, although he did say that he wants no violence.

In his first remarks to reporters since an angry pro-Trump mob stormed the Capitol building January 6th, leaving five people dead, President Trump denied that he bore any responsibility for a speech that many feel served as a call to action for his supporters.

"It's been analyzed," President Trump said over the roar of Air Force One. "People thought what I said was totally appropriate."

However, Democrats and many Republicans don't see it the same way and are seeking to hold Mr. Trump accountable. Democratic leaders in Congress have started down a path that seems likely to end with the president being impeached for a second time. On his way to Texas to show off a completed section of border wall, President told reporters the Democrats are making a mistake.

Democrats agree there is a lot of anger in the country, but they believe it is directed primarily at the president and at Republicans who have enabled him by turning a blind eye to his unsupported claims of massive voter fraud. As a result, House leaders had scheduled a vote for Tuesday night on a non-binding resolution urging Vice President Pence to declare the president unfit to serve, under the 25th amendment.

Oklahoma Congressman Tom Cole, (R) OK-4, the ranking member of the House Rules Committee, argued against the resolution this morning.

"We should call this resolution what it is," Rep. Cole stated. "A transparent attempt to pressure the vice president into performing a duty he does not believe is necessary at this time."

Indeed, Pence is not expected to invoke the 25th Amendment, which will leave Democrats with no choice, they say, but to move ahead with impeachment. A single article charging the president with incitement of insurrection was filed yesterday and could be voted on Wednesday evening. There is nearly unanimous Democratic support for impeachment and even some Republicans seem poised to vote in favor. It's not clear yet, though, whether House leaders would immediately transmit the article to the Senate for trial, potentially disrupting President-elect Biden's transition to office, or wait until some later time.

Meanwhile, preparations for the Biden inauguration continue. Workers were arranging chairs in a socially distanced fashion on the west lawn of the Capitol today, as more members of the National Guard arrive in the District. 10,000 guard members are expected in Washington by Saturday.

D.C. Mayor Muriel Bowser is asking Americans not to come to her city for the ceremony, but instead to participate in the inauguration virtually. She's also asked the Trump administration not to approve any public gathering permits for the next two weeks, "to protect the District of Columbia from the violent insurrection experienced at the Capitol and its grounds on January the 6th," Bowser said.

Pres. Trump Takes No Responsibility For Riot; Responds To Removal From Office Efforts