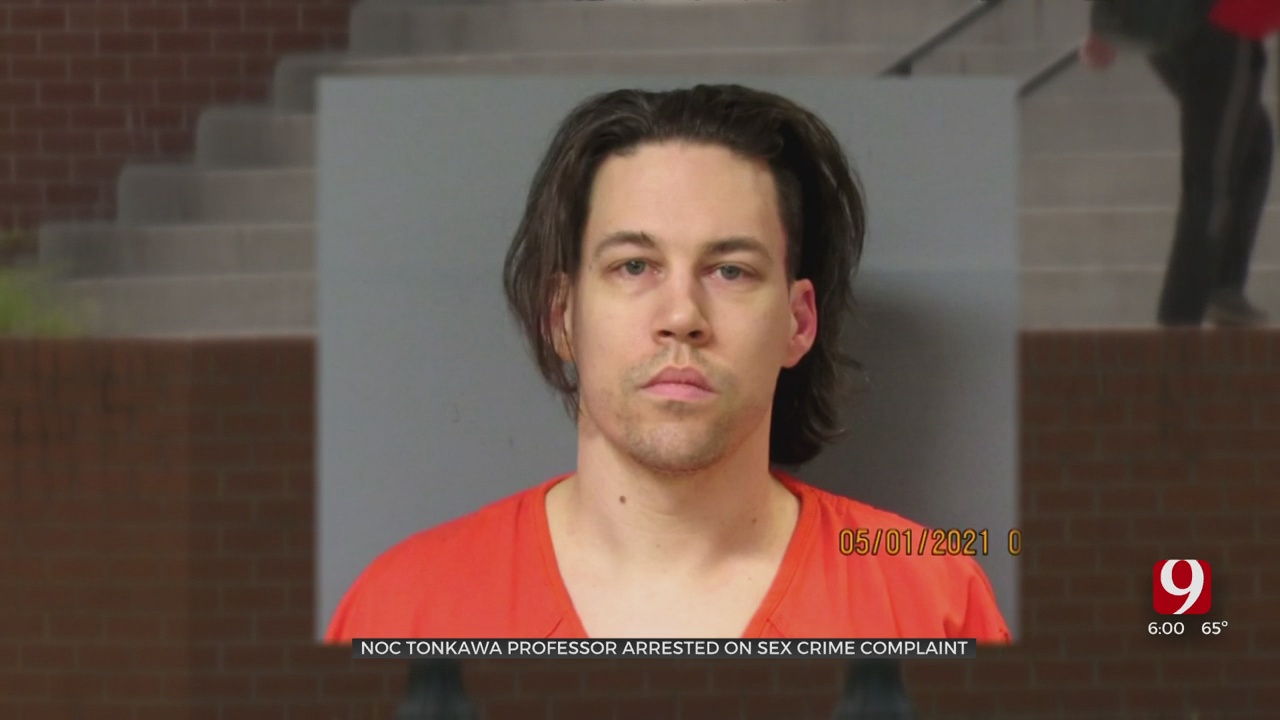 A Northern Oklahoma College professor has been arrested after reports of sexual misconduct and a long list of other alleged offenses.

Court documents show it was the NOC president that called the police about theatre professor Anthony Luetkenhaus.

The Tonkawa police chief was one of the officers that interviewed two alleged victims. Both gave disturbing details of alleged misconduct and even sexual assault.

Chief Nick Payne told News 9 he had never heard of anything like this, but he said NOC was assisting with the isolated incident in every way possible.

The allegations include a secret "game" that Luetkenhaus created involving students.

"It's been alleged from 2016 to present Anthony Luetkenhaus engaged in sexual relationships with his theater students…" said Payne.

"During that time, he developed a secret program called "the game" in which he was manipulating students to become his "pets" and he was the master of this game..." said Payne.

The two women that came forward said the theatre professor encouraged students involved to recruit others, regardless of age, and document their sexual encounters.

"It's alleged he would then possess these files and then distribute them on the internet," said Payne.

How far those files traveled, police don't know yet. But Payne told News 9 it could be internationally.

Luetkenhaus was arrested and could face a long list of charges including kidnapping, sexual battery and rape.

"Since the arrest, new victims inside and outside the state of Oklahoma continue to come forward," Payne told News 9.

Police said right now the number of alleged victims is more than 40.

Officers have searched the Luetkenhaus' Stillwater home as well as his NOC office. They have also reached out to several state agencies for help with the investigation and could even ask for federal assistance.

Police are also looking at the possibility of more victims in Illinois and Missouri, where Luetkenhaus lived prior to 2016.

NOC released a new statement Tuesday that said Luetkenhaus had been officially fired and was banned from campus.

Administrators said counseling services were available for anyone impacted.

The police chief said if a victim sees this or if anyone has any information on the case to reach out to their department.

You can call the department 580- 628-2516 or email tonkawapolicedepartment@yahoo.com.

Additionally, NOC President Dr. Cheryl Evans said that Luetkenhaus is banned from the campus for the protection of the NOC campus community. In a campus announcement sent out earlier today, Dr. Evans provided resources from both NOC and the area communities.

Professional counselors were on campus Monday and the college has arranged for counseling support for any victims traumatized by the situation. Students and employees are encouraged to contact Mr. Jason Johnson, Vice President for Student Affairs/Title IX Coordinator for counseling referral information. “Our campus community is heartbroken for the victims in the allegations against Tony Luetkenhaus and are fully cooperating with the Tonkawa Police Department in the investigation. We are doing everything we can so justice is served, and we can begin the healing process,” said President Evans. “We want to thank the courageous people who stepped forward to report their experiences. Our College is a safer place because of your bravery.”

Campus spokesperson Sheri Snyder stated, “There is limited information that can be shared because of the ongoing investigation and employment law. The investigation with Tonkawa Police Department is ongoing and we are being as transparent as possible.”

Northern Oklahoma College, the state’s first public community college, is a multi-campus, land-grant institution that provides high quality, accessible, and affordable educational opportunities and services which create life-changing experiences and develop students as effective learners and leaders within their communities in a connected, ever changing world.

NOC, a public two-year community college, serves nearly 5,000 students on the home campus in Tonkawa, branch in Enid, NOC/OSU Gateway Program in Stillwater, online, and the University Center in Ponca City. Of these students about 60% receive financial aid and/or scholarships. Over 80% of NOC students complete their degree with zero debt.

NOC is accredited by the Higher Learning Commission and offers associate degrees in three general areas: Arts, Science and Applied Science. The associate degree fulfills lower-division course work which is applicable towards a bachelor’s degree.