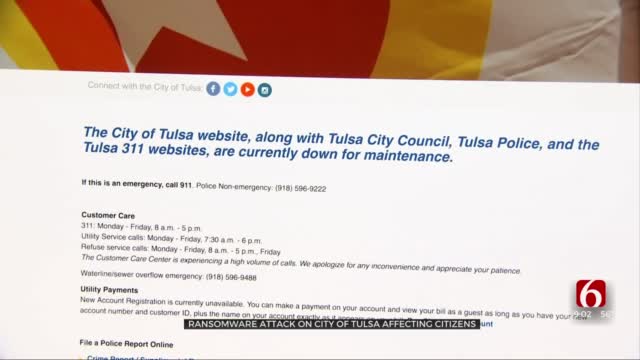 The City of Tulsa's ransomware attack is affecting city services and impacting many citizens.

For instance, people can't pay their utility bills or get a copy of accident reports.

J.T. Greer was recently in a car wreck and needs a copy of his report for insurance, but currently can't get one.

For the past week, Greer has been waiting on his accident report after he was hit by a driver who left the scene. He was told it was going to be available Monday, but because of the attack, that's no longer the case.

"So, I call them today and they tell me, oh all of our computers are down, we can’t do anything, we can’t give out police reports, we can't do anything," Greer said.

He said without that report, he can't get a rental car or have the insurance company pay for the damage to his car.

Greer said he has been recovering the past few months from a spinal surgery and has several doctors' appointments every week, so he needs a vehicle.

"I've had to beg and plead just to get rides and pay out gas money and I just don't have the money to do that right now," he said.

The city said it will have to scan every city computer - more than 3,500 of them - to make sure they are safe from malware.

Greer said for now, he's anxiously awaiting when he will be able to pick up the accident report, and of course, never expected something like this to happen.

"I mean, I don't know what to do at this point," Greer said.

The city has not said when their computer system will be back online.