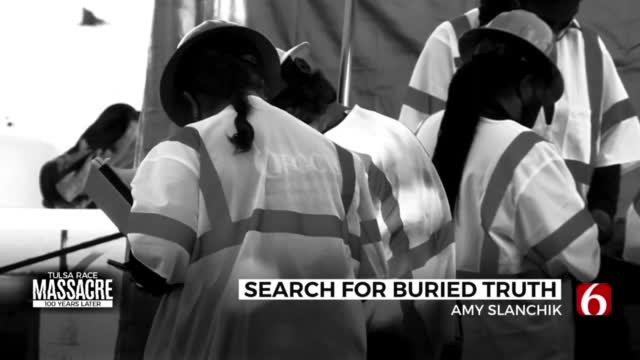 One hundred years after the Tulsa Race Massacre descendants, the city, archeologists, historians, and activists are still working to uncover truths about where the victims are.

Archeologists discovered a mass grave at Oaklawn Cemetery in October 2020. It is not far from the headstones for Eddie Lockard and Reuben Everett, both known massacre victims. While no one knows who is buried in the mass grave, or if it is connected to the massacre, it is the closest many have felt to finding answers.

“I’m just very appreciative to all the hard work that is going into finding our truth. To, again, bring some sense of justice and healing to our community,” Brenda Alford, a Tulsa Race Massacre descendant, said during a press conference in October 2020.

Kary Stackelbeck, the State Archeologist of the State of Oklahoma, announced in October that a mass grave was found in the “Original 18” site at Oaklawn.

“Several individuals have been placed inside of coffins and buried at that location. This constitutes a mass grave,” Stackelbeck said.

In a recent interview, Tulsa Mayor G.T. Bynum recalled the moment he learned the mass grave was found.

"First it was, 'They found a grave where there's not supposed to be anything. We have no records of anything being there.’ Then later in the day called and said, ‘Well they've found an additional one.' And then just throughout the day it was, ‘Well now there's three more and there's four more after that."

But before Tulsa would reach that moment, it would be historic just to turn the soil.

A search was started about 20 years ago, but historian and author Scott Ellsworth said politics got in the way before any digging happened.

“Our first effort was gone; [it] was over before a single bit of earth was turned,” Ellsworth said during a July 2020 news conference.

That long-awaited first dig, part of a renewed investigation for the truth, happened in July 2020.

“This is a historic day for Tulsa and for our country,” Bynum said during the news conference.

While momentum was strong, ultimately nothing significant was found in the first site at Oaklawn.

“We kept our heads high, but I’ll tell you that was a real low point because there’s concern of ‘What if we have done all this and raised these expectations and then there isn’t anything there?” Bynum said in a recent interview.

Mayor Bynum had been wondering what secrets could be underground at Oaklawn years before his administration reopened an investigation in 2018. Back when Bynum was on the City Council with Jack Henderson in 2013, the two went to the mayor with the quest for answers, but Bynum said that administration did not want to pursue the search.

“We were powerless as city councilors to do anything. And I remember telling Councilor Henderson, ‘If either of us are ever mayor, we’re going to follow through on this,’” Bynum said.

While most of the work, and all the attention, has been on Oaklawn, the investigation will continue beyond the city cemetery. Rolling Oaks Memorial Gardens Cemetery will be the next place archeologist look for victims. It will start with the ground penetrating radar that was first used at Oaklawn.

“The work we are going to do this summer is expansive and will take months,” Mayor Bynum said.

When the team begins a full excavation of the mass grave starting on June 1st, scientists will be looking for signs of trauma, such as gunshot wounds or burns. There is also the hope to identify the remains through DNA.

“That is going to probably take years to do that work, and that is if we can even recover DNA from the remains. We will not know that until this summer. But that is a long-term project,” Bynum said.

It is work that will reach far beyond this moment in time. A time when the city pauses to remember the lives lost in the 1921 Tulsa Race Massacre, 100 years later.