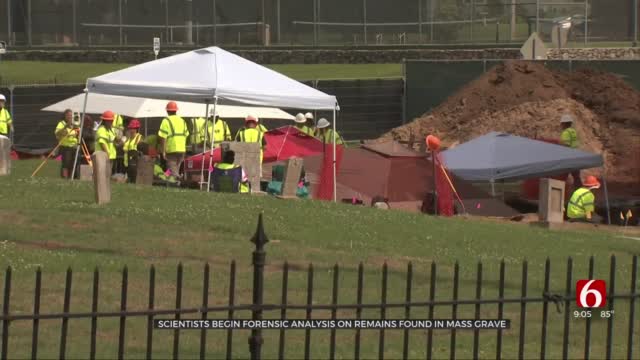 Some of the human remains found in the mass grave at Oaklawn Cemetery are now being studied, so experts can determine whether they are connected to the 1921 Tulsa Race Massacre.

Forensic Anthropologist Dr. Phoebe Stubblefield is looking for any signs of trauma, like burning or gunshot wounds.

Experts on the ground said the remains found during the test excavation in October were in "poor condition," adding that the thickest bones were intact or in fragments. Stubblefield said teeth have preserved very well.

The city shared photos on its website from inside the dig site, giving a glimpse of some of the other things the team is finding, like coffin hardware, and other artifacts.

Members of the public oversight committee have started carrying human remains from the mass grave to the forensic lab on site. They are protected inside a cardboard box and covered with a layer of material.

Wednesday afternoon, the group brought over the second set of human remains for analysis. Those who carefully made the trip across the cemetery include the chair of the committee, Kavin Ross.

"Whomever they are, poor folks, folks who died in the pandemic or folks from the massacre, they need their own proper space, their own proper rest. No matter who they are. But we're going to let scientists do their job,” Ross said.