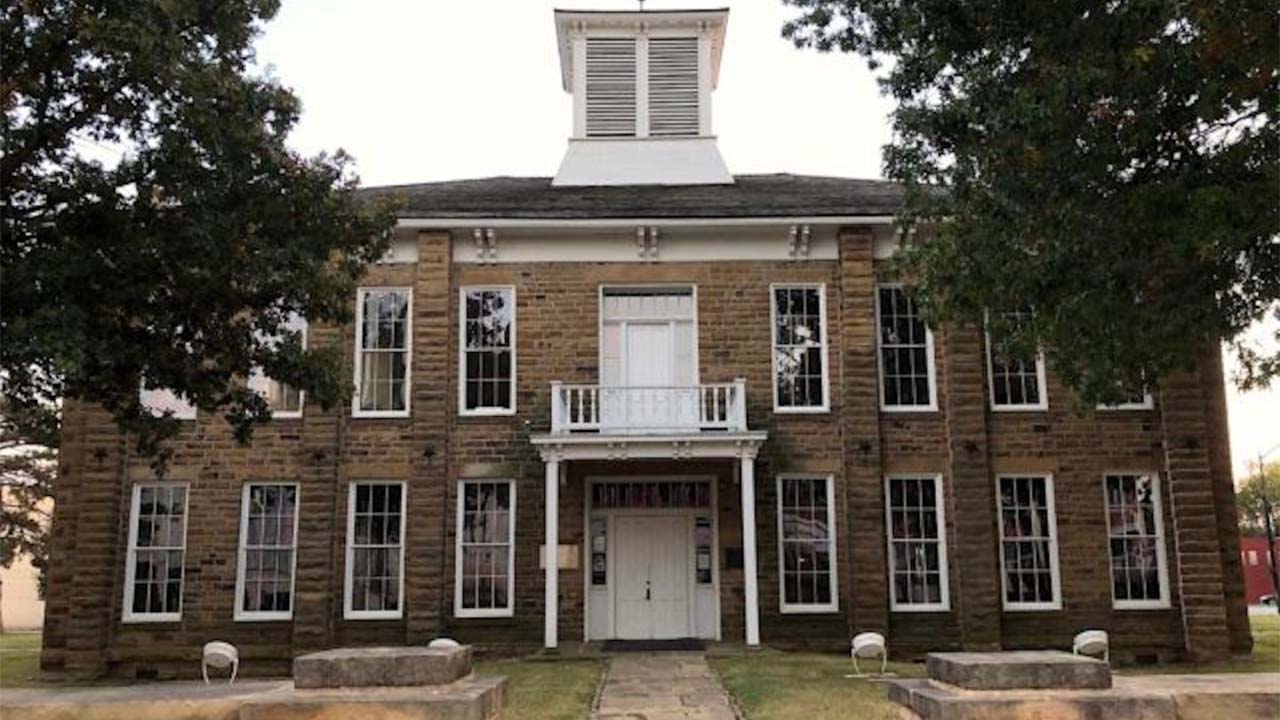 Anyone who wants to gain a better understanding of how Muscogee Nation citizens and Native Americans at large feel about their reservation sovereignty should take a trip to Okmulgee and tour the historic Muscogee Nation Tribal Council House in the center of town.

As part of what we’re calling NonDoc’s Rural Listening Tour, editor in chief Tres Savage and I visited the Council House on July 27 and learned the property’s history as the original meeting place of the Muscogee National Council in the 1860s and the building’s role in hosting more than 30 tribes that met as part of an International Council during the 1870s. John Beaver, curator of the Muscogee Nation Cultural Center and Archives, also explained how, with the establishment of statehood in 1907, the federal government assumed control of the Council House and rented it to the new city of Okmulgee.

More than 100 years later, in 2010, the Muscogee Nation re-purchased the property, operating it as a museum that tells the successes, struggles and strife of the nation’s fight for sovereignty.

On our day trip to Okmulgee, our team members also met with Okmulgee Mayor Richard Larabee, Rep. Scott Fetgatter (R-Okmulgee), Muscogee Nation director of communications Jason Salsman, Okmulgee Chamber of Commerce director Kay Rabbitt-Brower, and staff of the Okmulgee Times and Mvskoke Media, in addition to other folks along the way.

As a reporter who has chiefly covered tribal matters since I joined the NonDoc team in May — including tribal elections and the aftereffects of the landmark McGirt v. Oklahoma ruling — it felt more than necessary to tour the historic Muscogee Nation Council House while we were in Okmulgee.

Beaver, our tour guide, provided information about how the Muscogee Nation and its government operated in the late 1800s — after systemic Indian Removal from the southeastern United States and long before Oklahoma statehood. The timeline is complicated, which underscores why you should visit the Council House yourself to learn the full story.

The Muscogee Nation contained six judicial districts: The Okmulgee District, the Deep Fork District, the Wewoka District, the Eufaula District, the Muskogee District and the Coweta District. Each district was equipped with a judge, a prosecuting attorney and a company of light horsemen. Judges and attorneys were nominated by the principal chief and elected by the National Council.

However, white settlers within the Muscogee Nation could not be tried for crimes under Muscogee law. Additionally, Muscogee citizens were subject to federal authority in cases involving U.S. citizens. Those cases were managed at the nearest federal court in Fort Smith, Arkansas. Sound familiar?

Upon Oklahoma statehood in 1907, the federal government seized control of the Council House under the Department of the Interior and leased it back to the city of Okmulgee. In 1919, the city purchased the building from the Department of the Interior for $100,000. The Muscogee Council House museum took lease of the building in 1971, with it having been used previously as a sheriff’s office, a boy scout meeting room and a YMCA. In 2011, the city of Okmulgee sold the Council House back to the Muscogee Nation for $3.2 million.

The ownership saga of the Muscogee Nation Council House stands as a stark reminder that, while many celebrate the anniversary of Oklahoma’s statehood, tribal citizens often know other parts of history that paint a more complete picture.

‘If I were governor for a day…’

Earlier that morning, members of our team met for breakfast with Oklahoma Rep. Scott Fetgatter (R-Okmulgee) at Boomarang Diner.

Over pancakes and coffee, Fetgatter, a Choctaw Nation citizen, answered a couple of questions about state-tribal relations in the wake of the McGirt v. Oklahoma ruling.

“If I were governor for a day, I would figure out what the expectations of tribal communication are and work the channels through those protocols,” Fetgatter said. “I would be looking for ways to work on these issues with the tribes, professionally. I would work with the tribes to — first of all — have a good understanding of how much they do in our communities.”

As we continued our visits around town, we heard several stories — unprompted — about what the Muscogee Nation has done for the community: rebuild dangerous intersections, operate the area hospitals, help a youth softball team travel to a national tournament.

Fetgatter also helped make sure we were able to arrange a visit with Muscogee Nation director of communications Jason Salsman, who spoke about the two-sided discourse surrounding the SCOTUS ruling.

Salsman said he would like the public dialogue to be about how to “implement” the court decision instead of how to “fix” it.

“You’ve had one side, or one body, one section of thinking that has said, ‘Let’s put all of our energy into doing what we have to do to affirm what the (Supreme) Court has said’ (…) Doing everything, putting all of our energy into the future and looking forward, doing what we have to do to make this work” Salsman said. “Then you have another side that has put all of their energy into fear mongering and media, [and these] sky is falling narratives of ‘hearts and minds’ of Oklahomans have to be turned against this decision.”

Salsman emphasized multiple times a desire for state leaders and tribal leaders to come together.

“Let’s collaborate. Let’s be government-to-government and work this out. And there are ways we can do that,” Salsman said. “Instead of that, we have a side saying, ‘Not only do we not want to work with you and help you, we want this thing repealed.'”

Outside of our conversations surrounding the SCOTUS ruling, we learned about the Okmulgee Main Street organization, whose initiative is to promote economic growth within downtown Okmulgee.

Main Street is currently working to find a suitable tenant for the Kress Building, which features a natural spring that runs underneath it. The Kress Building could be perfect for a brewery or restaurant, we were told.

Okmulgee Times staff told NonDoc staff about a little league softball team from Muskogee that was representing Oklahoma at the Little League Softball Southwest regional tournament in Waco, Texas. At the time of our visit, the Muskogee team had run-ruled New Mexico’s team 15-0. The next day, the Muskogee team beat the Texas West team 7-5 before beating them 8-5 in a championship game rematch Thursday.

Since they won the regional competition, the Muskogee team will go on to represent Oklahoma at the Little League World Series in Greenville, North Carolina. Games are scheduled to begin Aug. 11.

Before we left town, we stopped by the Mvskoke Media office to chat with their staff about their ongoing operations. The organization operates the Mvskoke News, a bi-weekly newspaper mailed free of charge to any Muscogee citizen, and radio and TV broadcasts to provide tribal citizens information about their government and communities.