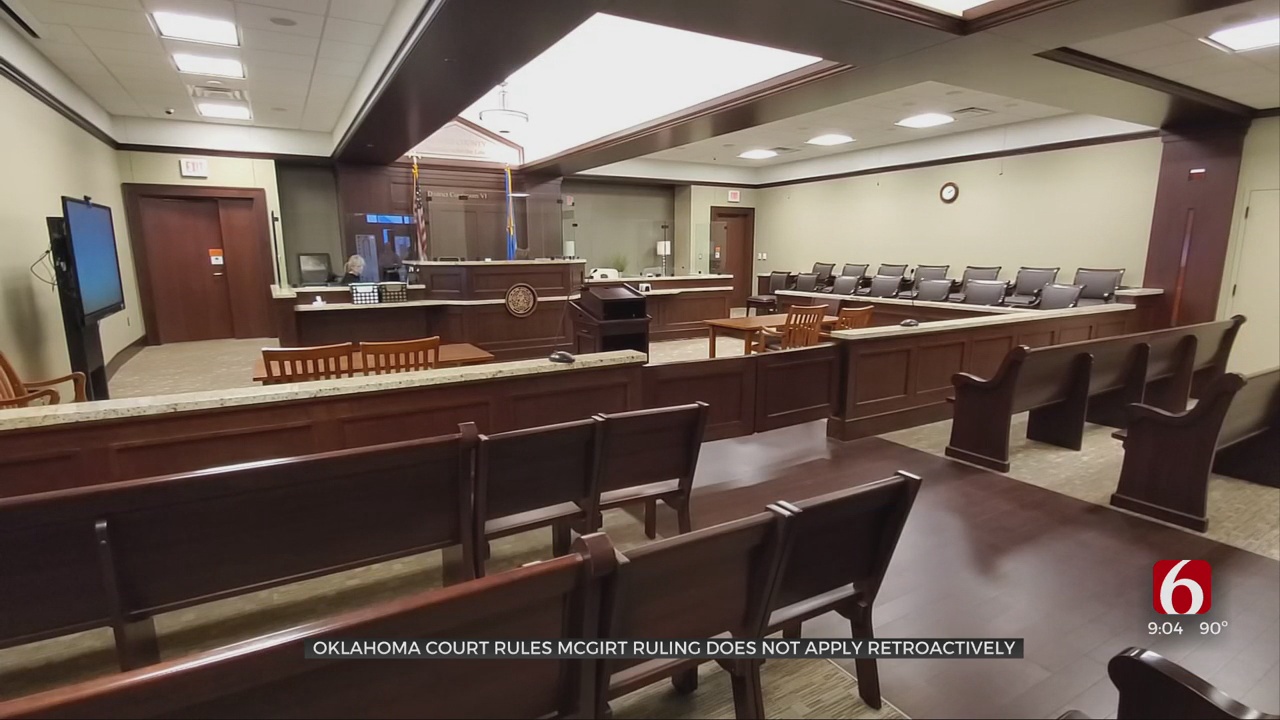 The Oklahoma Court of Criminal Appeals decided Thursday 4-0 that last year's U.S. Supreme Court ruling on tribal jurisdiction does not apply to people who were already convicted in the past.

The decision means thousands of cases will no longer have to be re-tried in federal or tribal courts, and victims won't have to go through the court process all over again.

"They were going to have to start back from square one," Thorp said. "And when I would meet with them, they were just heartbroken with the idea of having to go back through the criminal justice system."

"I had a conversation with a victim whose mother was killed many years ago and she was tearful," Ballard said. "She was very happy when I gave her the news that it looked like her mother's killer's conviction was going to stand."

The McGirt ruling will still apply to all new cases that have come up in the last year.

The Cherokee Nation's Attorney General Sara Hill said in a statement, the decision affirms the legal status of the nations, and they'll continue to work with federal and state law enforcement going forward.

Thorp said the move takes pressure off a justice system overburdened with past cases.

"Because now they can focus on just these modern cases, they don't have to dig up the old cases and try and rebuild them to re-try them," Thorp said.

"This decision was great for certainty in criminal law as we move forward. But there's a lot of open questions," he said.

For example, the US Attorney's offices in Oklahoma said they're reviewing how the decision impacts past cases their offices have already received.

The Department of Justice issued the following response:

This morning the Oklahoma Court of Criminal Appeals issued its decision in State ex rel. Matloff v. Wallace holding the United States Supreme Court’s ruling in McGirt v. Oklahoma does not apply retroactively. The United States Attorney’s offices in Oklahoma are reviewing today’s OCCA opinion and assessing its potential impact on cases previously referred to the United States for potential federal criminal prosecution,” said Acting United States Attorneys Christopher Wilson, Clint Johnson, and Robert Troester. “In the interim, our offices will continue to focus on our mission of ensuring public safety and holding defendants accountable for their criminal acts.”

The Attorney General for the Cherokee Nation also issued a statement saying,

"Today's OCCA decision examines legal questions regarding the status of past criminal convictions, and has affirmed the legal status of the Cherokee Nation's Reservation, and that of the Choctaw Nation and Chickasaw Nation. As Oklahoma's governor rushes forward in an attempt to convince the Supreme Court to reverse last year's decision and break treaties and promises, Oklahoma's courts continue to work through the legal issues as they arise. The Cherokee Nation will continue to work with federal, state, and local law enforcement to do the same."

“This is a significant victory of the people of Oklahoma. I commend the judges who voted in agreement with our position,” Attorney General O’Connor said. “There are thousands of cases that would have to be retried if the State had lost this case. In many of those cases, the crimes were committed long ago. Witnesses may be gone. Evidence may be lost. Re-prosecution might be barred by statutes of limitations. That is why I appreciate the judges who stood up for the rule of law and protecting victims that would have been revictimized by another trial, and possibly revictimized if their abuser is set free.”

“This is a day where justice for some of the victims was restored. We are all safer because a significant number of perpetrators will remain behind bars. Make no mistake, McGirt will continue to have disastrous effects throughout the State even despite this latest ruling. But today is nonetheless an important victory for the people of Oklahoma.”

“Today is a major win for victims of crime and public safety in Oklahoma. I am pleased that the Court agreed that retroactively applying McGirt to tens of thousands of cases would unnecessarily traumatize victims and give dangerous criminals opportunities to fall through the cracks. While today’s ruling is a significant step forward, McGirt still presents major challenges that threaten the future of Oklahoma. I will continue to work to protect the state’s sovereignty and ensure equal protection under the law for all 4 million Oklahomans.”

"Today's OCCA decision examines legal questions regarding the status of past criminal convictions, and has affirmed the legal status of the Cherokee Nation's Reservation, and that of the Choctaw Nation and Chickasaw Nation. As Oklahoma's governor rushes forward in an attempt to convince the Supreme Court to reverse last year's decision and break treaties and promises, Oklahoma's courts continue to work through the legal issues as they arise. The Cherokee Nation will continue to work with federal, state, and local law enforcement to do the same."

“The U.S. Supreme Court ruling in McGirt was an important defense of tribal sovereignty and a reminder the federal government must honor its treaties. As we have said from the start – and as today’s ruling confirms – it did not mean convicted criminals would immediately be released, as some have claimed. All Five Tribes wrote in support of this decision, and we are pleased by the ruling. Most importantly, this is a positive result for the victims of crimes and their families, because in many cases it means they will avoid being re-victimized by new trials. We remain committed to prosecuting people who commit crimes on Indian land."