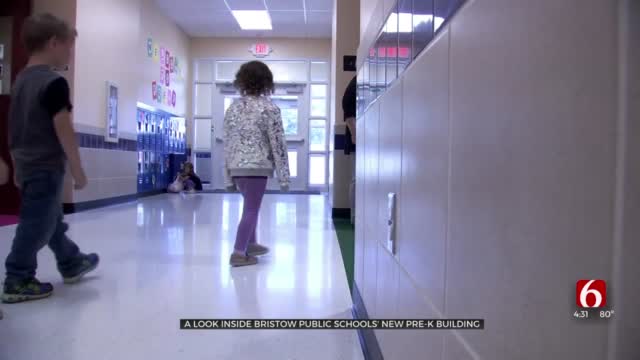 Bristow Public Schools has more Pre-K students this year thanks to a larger building.

The new Pre-K Center was built as part of a $6 million bond passed in 2019. The new building has eight classrooms, four of which are storm shelters that can hold more than 500 people.

“A couple of our rooms before were really small and so they like it a lot better because they can do more things with the kids than they could before,” said Bristow Pre-K Teacher Keli Schonfield.

Schonfield has been teaching with Bristow Public Schools for 17 years now. She said this new building is a major upgrade from the old one because there’s a lot more space.

“The kids can move around and play easier and we can do a lot more of our active learning activities because they can spread out and move more,” said Schonfield.

The previous building could only hold 80 Pre-K students and the new building can have up to 160. Thanks to a $6 million bond and donations from the community, the district is now able to have five Pre-K classes instead of four.

“We had four classrooms of 20 kids each and they had to share two very small bathrooms,” said Edison Elementary School Principal Debbie Ponder.

The new building has two large bathrooms and then smaller individual bathrooms in each classroom along with additional storage space. They also have two active learning labs and four of the classrooms can be used as storm shelters.

“We can get all of Edison school, which is about 480 kids and then 50 something adults, into that storm safe area so that’s a huge relief that we can do that now if bad weather is on the way,” said Ponder.

Pre-K isn’t a mandatory grade for students, but Ponder said it’s an important one. She said this additional space will help students go far.

“When you go into the classroom you don’t see desks, they’re not sitting at desks, but they’re learning as they build with Legos, as they play in the dollhouse, they’re learning skills that they’ll be able throughout the rest of their school years,” said Ponder.

The district previously used their college and career center on the high school’s campus as a community storm shelter, but instead they’ll use these classrooms at Edison because it’s more centrally located.