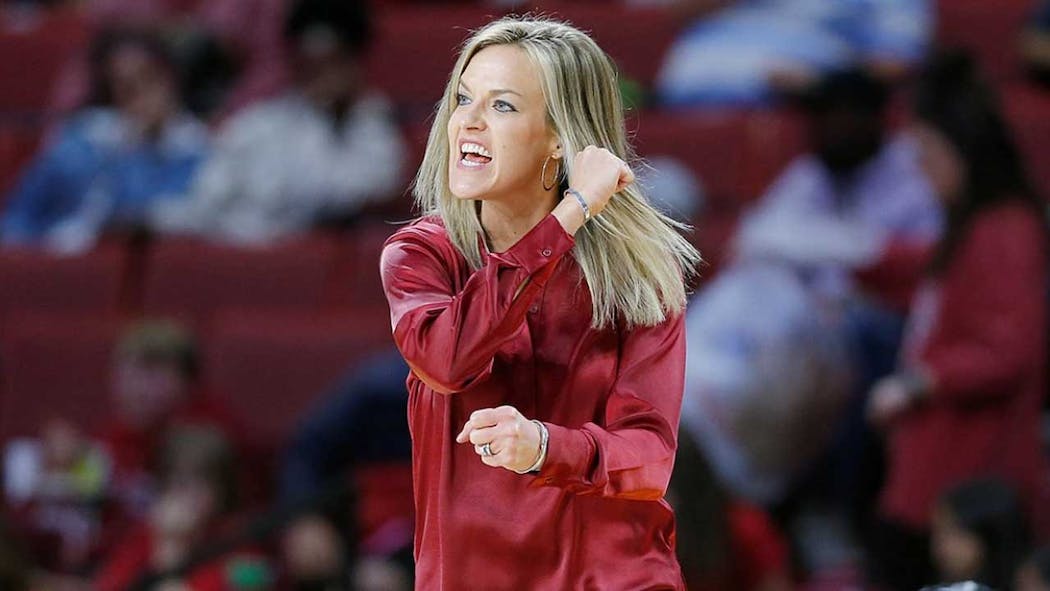 The Oklahoma women's basketball team shot 48.7% from the field as six Sooners scored 10-plus-points, leading OU to a 101-89 win over Arkansas State Friday morning at the Lloyd Noble Center.

The win marked the first at home under Jennie Baranczyk, who notched her first road win as the Oklahoma (2-0, 0-0 Big 12) head coach Tuesday at South Dakota. The Sooners, playing in front of over 3,000 kids for Field Trip Day, hit the 100-point threshold for just the third time since the start of the 2015-16 season.

"What a game that was in really fun environment with all those kids," Baranczyk said. "Obviously there are a lot of things that we'll focus on to get better at, but I loved the balance of our scoring. I loved the energy that our women had in playing together, I liked our number of assists, we got better at rebounding after Tuesday, it's just going to be a really fun team and really fun season."

It was the first time since a win over Kansas on Jan. 24, 2018, that six Sooners scored in double figures. Madi Williams led the charge with 18, while Taylor Robertson and Ana Llanusa added 17 and 16, respectively. Freshman Emma Svoboda tallied 14 and a team-high nine rebounds, as Nevaeh Tot and Skylar Vann scored 10 apiece.

Trailing by one at the 3:50 mark of the first quarter, the Sooners got hot and went on a 23-9 run through the 7:04 mark of the second quarter to take a 13-point lead that they'd never surrender. The Sooners shot a staggering 51.4% from the field in the first half, powered by Robertson's 12 first-half points with four made 3-pointers. The sharpshooter finished her day five made treys, the 28th time she's tallied five or more threes in a game.

Baranczyk's team, known for its pace, turned the pressure up in the third quarter on both sides of the ball, outscoring the Red Wolves 23-14 in the frame to take a 72-54 lead into the fourth. The Sooners grew their lead to 24 before an ASU run cut the deficit in half with 41 seconds left, a lead that would hold until the final whistle, delivering Oklahoma its seventh 2-0 start in the last decade.

Williams' led Oklahoma's balanced effort with 19 points on 8-of-13 shooting and added seven rebounds in the winning effort. Svoboda, a freshman from La Quinta, Calif., grabbed four offensive rebounds and five on the other end for a team-best nine boards, paired with 14 points off the bench in her second game. In just her second start, freshman Kelbie Washington's five assists set the bar for Baranczyk's team as she added two steals and seven points. Ana Llanusa notched the 75th appearance of her career, scoring 16 points, including 7-of-8 from the free throw line, in her return to the Lloyd Noble Center after missing last season due to injury.

The Sooners return to the court Nov. 16 when they host Central Arkansas at the Lloyd Noble Center at 6 p.m.

Pet Of The Week: Kermit

News On 6 Friday’s Pet of the Week is Kermit! He is a 15-pound male Aussie/Terrier mix.

Pet Of The Week: Kermit

News On 6 Friday’s Pet of the Week is Kermit! He is a 15-pound male Aussie/Terrier mix.

Sawyer Buccy The Sapulpa community showed up in a big way to replace toys, vandals destroyed over fall break.

News On 6 A Tulsa business has donated more than $10,000 worth of coats, backpacks and school supplies to Union Elementary School.

Kristen Weaver A Tulsa Public Schools paraprofessional who helps with special education possibly saved a life this week after seeing a student choking.