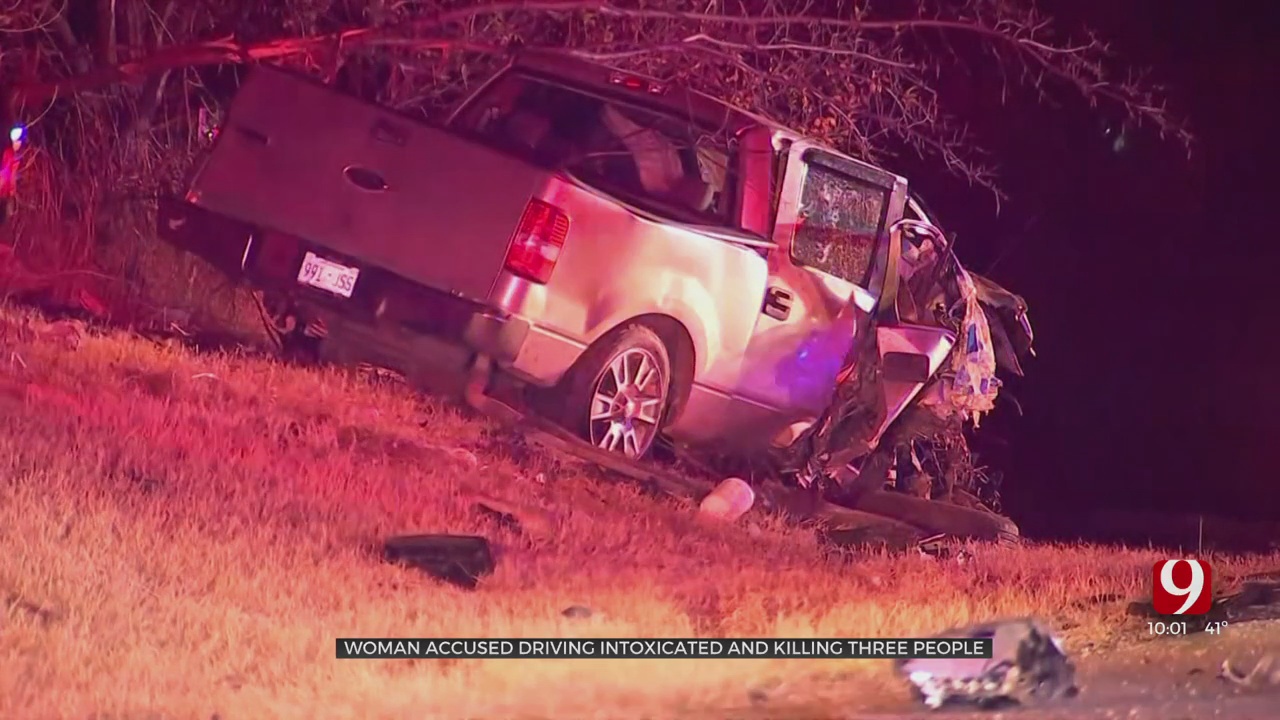 The driver accused of causing a head on crash that killed three people in December has been released from the hospital and turned herself into authorities.

Oklahoma Highway Patrol says Patricia Lynn McLoed, 34, caused a head on crash on Highway 39 approximately one mile west of Purcell in McClain County on the night of December 2.

Troopers say McLoed became impatient with vehicles in front of her and attempted to pass them near the top of a hill in a no passing zone. She crashed head on into an SUV traveling in the opposite direction.

A two-year-old toddler survived the collision in the SUV. Troopers credit the toddler’s car seat for that.

For all families involved, the Christmas and New Year's holidays have been tough.

“We didn’t get to spend Christmas with Tyler, no New Years,” said Samantha Stephenson, Durham’s grandmother. “His birthday is April first. He is my April Fools baby, no birthdays. I get to see him at the graveyard.”

After being released from the hospital, troopers say McLoed immediately turned herself in after a warrant was issued for her arrest.

Investigators say McLoed would not consent to a breathalyzer or blood test to be taken following the crash. A judge would later sign off on a search warrant for McLoed’s blood samples at OU Health in Oklahoma City.

“I don’t know why I’m shocked, I lost my son to an intoxicated driver years ago,” said Parker. “I don’t understand why people feel like it is okay to drink and drive or whatever else they do that makes them intoxicated.”

According to court records, McLoed worried about marijuana and alcohol being in her blood.

Investigators say McLoed admitted she ‘makes a vodka based, marijuana infused liquid that she uses throughout the day for medical reasons’ and ‘had consumed approximately a wine glass amount of liquid throughout the day’ before the crash.

“Why would you drink a THC infused vodka?” said Stephenson. “I mean, why would you do that? And then why would you get behind the wheel of a vehicle and drive and think you were okay? I don’t understand that.”

Court records indicate McLoed’s blood alcohol level was .10, with .08 being the legal limit. THC measurements were not taken, according to troopers.

While family takes comfort the wheels of justice are beginning to spin, it lacks what they want most.

“I just want my kid back,” said Stephenson. “She took everything from us, everything. I have a lot of questions, but I think we all do.”

“I’m just praying that the judicial system works and that this person gets the time that they deserve for taking three lives,” said Parker. “Me personally, I’m not going to be satisfied until it is three life sentences.”