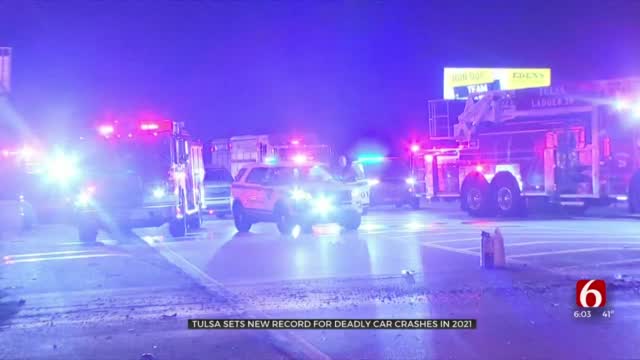 Tulsa Police say the city set a record for the number of people dying in car crashes in 2021.

Officers say a lot of these fatal accidents were caused by people driving over the speed limit, so they plan to put a stop to that this year.

"We have two families that lost more than one person in a collision,” said Tulsa Police Traffic Safety Coordinator, Lt. Paul Madden. “What was Christmas like? It sure wasn't the same I know that."

"I came in and the number was in the low 40's and now here we are sitting at nearly 70 people,” said Lt. Madden.

Out of the 69, 23 of them were walking when they were killed and at least two deadly crashes were caused by people driving the wrong way.

"Those collisions were basically the most vicious things I've seen in my career,” said Lt. Madden. “There wasn't much left of the vehicles."

Lt. Madden says the big three issues that caused people to die, were driving under the influence, distracted driving, and speeding.

“I know of at least one family whose heart I broke one night that their family member would still be here if it weren’t for excessive speed,” said Lt. Madden.

One of those victims was Mary Byers.

Byers was heading to work as a 911 dispatcher on October 5th when she was hit by a driver who then left the scene.

She told News On 6, “Mary was a good friend to many of the people here” and added, “she saved a lot of lives.”

Lt. Madden says other states are seeing the same problem.

He says the biggest thing people can do to be safe is to focus when they're behind the wheel.

“I would like to see Tulsa drivers fix this national trend and just start caring about what I'm doing, care about my driving habits, and I think we can put a dent in it, I know Tulsa can,” said Lt. Madden.

The Department of Public Safety says preliminary reports show more than 700 people died in crashes across the state last year.

They say this is the highest number of fatalities recorded in the state since 2012.

450 of the 700 people died in crashes worked by the Oklahoma Highway Patrol.