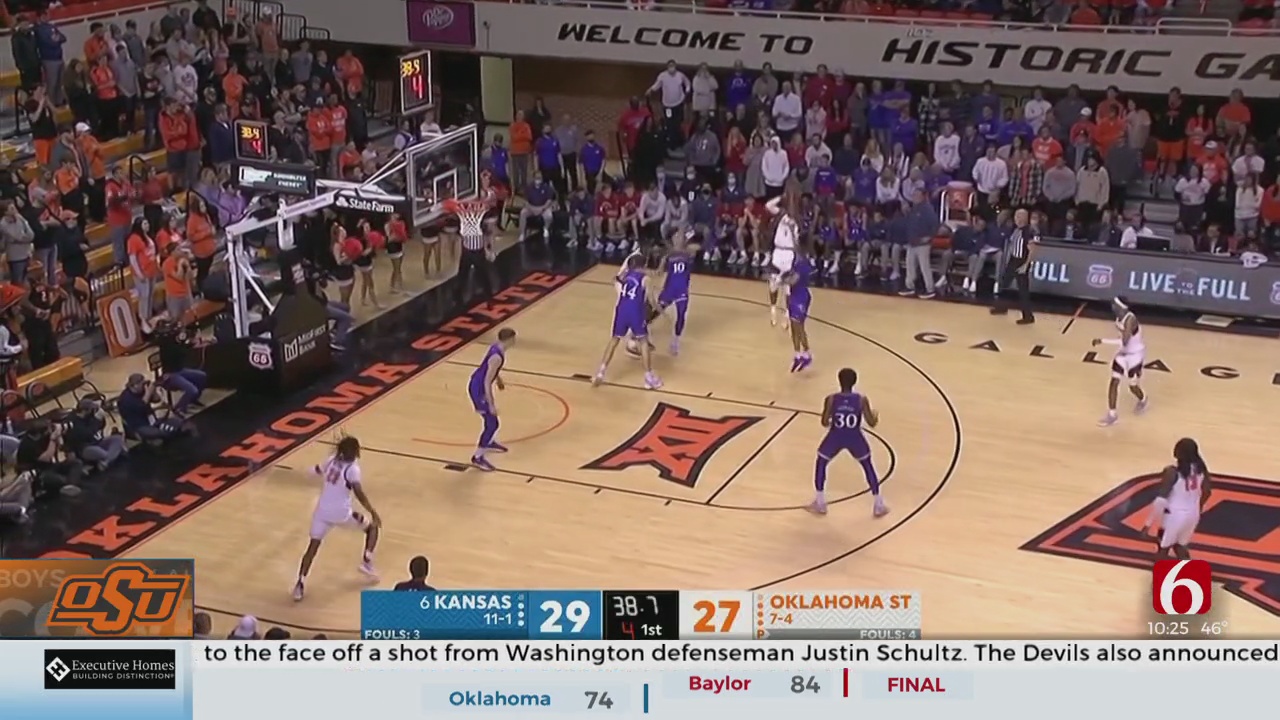 David McCormack had 17 points and a career-high 15 rebounds, Ochai Agbaji scored 16 points, and No. 6 Kansas overcame a scoreless streak of more than 9 1/2 minutes to beat Oklahoma State 74-63 on Tuesday night in the delayed Big 12 Conference opener for both teams.

Kansas (12-1) missed 19 straight shots to end the first half, allowing the Cowboys to pull even at 29-29 by halftime, but the Jayhawks made seven straight shots during a 20-8 run early in the second half that put them back ahead by double digits.

Oklahoma State (7-5) came no closer than six points the rest of the way. When the Cowboys closed within 63-57 on a basket by Isaac Likekele with 6:14 left, Christian Braun began a 9-0 run for Kansas with a pair of baskets. Braun finished 15 points.

Kansas won its eighth straight game and its 31st consecutive conference opener, a run that began in the 1991-92 season, when the Jayhawks played in the Big 8 Conference. The Jayhawks are 12-1 for the ninth time in coach Bill Self’s 19 seasons and now lead their series against Oklahoma State, Self’s alma mater, by a 120-60 margin.

Likekele led Oklahoma State with 16 points. Oklahoma State hadn’t played since losing to Houston on Dec. 18 due to scheduling issues stemming from COVID-19. The Cowboys had a game against Southern California canceled and their previously scheduled Big 12 opener against Texas Tech postponed. Kansas’ scheduled league opener on New Year’s Day against TCU also was postponed.

Kansas, which entered the game ninth in NCAA Division I in scoring at 85.2 points per game, looked like it would run away from the Cowboys early. The Jayhawks hit six of their first eight shots and went ahead 29-15 on a 3-pointer by Braun with 9:12 left in the first half.

Those proved to be the Jayhawks’ final points of the half as they missed 19 straight shots. A basket by Bryce Thompson — who transferred to Oklahoma State from Kansas — with 35 seconds left tied the game.

Kansas: Kansas shot 43.1% from the field, well below its 51.4% average. With the grind of the Big 12 ahead, the Jayhawks know they can win when they’re not at their best offensively.

Oklahoma State: The Cowboys are in the middle of a stretch of six straight games against teams either ranked or receiving votes in the AP Top 25, and the fact they were able to hang with one of the Big 12’s powers for most of the game would seem to bode well for them.